First of all, the most interesting man in lacrosse is back on Twitter. Second, he had an adventure today.

The 2013 Season is over (sadly). I am returning to the Twitter sphere! Went cold turkey, did not look at any tweets for five months!

This is fantastic, and today's dispatch from the Duke head coach confirms that fact:

Driving into work! Top Down No more rain! Tom Petty on the radio!

This got me thinking: What would Danowski look like driving into work with the top down and the sun shining while listening to Tom Petty? Danowski didn't tweet a picture of his commute -- probably for the best, as that's dangerous and I don't want him to take a hospital-ordered break from Twitter while they repair his neck after getting into an accident while tweeting -- but College Crosse's graphics department put together a rendering of what it may have looked like: 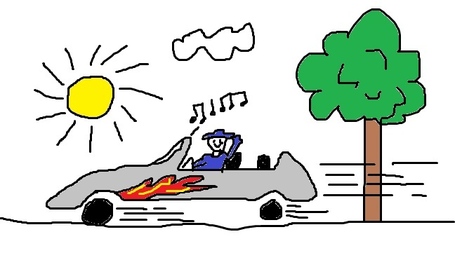 Some brief notes on this:

Great things lie ahead, you guys.