Share All sharing options for: General Scott Perri and the Drexel Offensive

Another "Player of the Year" piece, another one that omits the second-most productive offensive player in the country -- Scott Perri of Drexel.

For shame, Inside Lacrosse.  For shame.

Maybe.  It's not that Stanwick isn't great (he is), but if we're seriously going to talk about the college game's "Player of the Year," we really need to consider production impact and how the player is contributing in the overall.

Here's the story: Drexel is all of 6-5 this season and they're putting the nation's second-most efficient offense on the field every night (the Dragons have an adjusted offensive efficiency of 36.33).  Pretty shocking for a team just above .500, right?  Easy, champ.  Drexel is having a bit of problem defensively in that they can't stop anyone consistently. The Dragons are 51st (!) in adjusted defensive efficiency at 31.32.  Despite these defensive liabilities, though, Drexel is a respectable 19th in adjusted efficiency margin at 5.01.

Yes, you're understanding this correctly: Drexel's offense is carrying its broke-ass defense all the way to wins that it probably shouldn't get.  If you're talking about player value and outstanding performers, wouldn't you need to include a guy that is the centerpiece of an offense that would probably be part of a top-10 team if it was paired with a defense that wasn't functionally paralyzed?

In other words, how many wins would Drexel have if Scott Perri wasn't losing his mind every game?

That's what I'm talking about, people.  In the long run it doesn't really matter, though, because Rob Pannell is ultimately winning every award that honors excellence in the field of excellence this year.

So, enough with the soapbox stuff.  Let's break apart the Drexel offense and see where the production is coming from.  Charts, graphs, and super-fun explanations continue after the jump.

Let's start with a quick table.  This one reflects Drexel's five double-digit point scorers on the season.  The last column reflects "Total Offensive Value."  As noted previously, this is merely an individual's points per 100 offensive possessions. It's better than points per game because points per game, as a metric, is pretty pointless.

So, duh, Perri is the big producer on the team.  The important question, then, is how important is Perri to Drexel's second-rated offensive machine?

This is a different kind of concept that isn't written about a bunch, so I'm going to explain it a little.  The following tables and graphs are designed to show a player's integration into an offense.  I'm asking these kinds of questions:

Let's start with the tandems.   From the following table, you can see that a plurality of Drexel's tallies have come via a Scott Perri unassisted goal.  That's pretty impressive for a guy that sees his opponent's best marker every game.  What's more, Perri is able to do this in the construct of a super efficient offense. 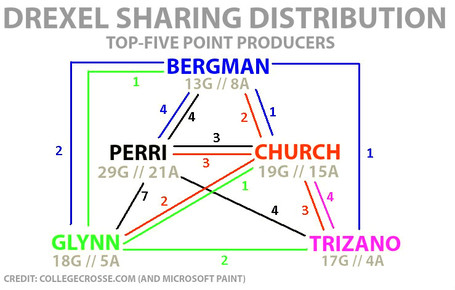 Here's how to read this thing.  Everything is color coded, so even a six year-old can figure it out.  Follow the colors.  For example, Perri has provided Glynn seven assists; Glynn has not provided Perri any.  Church has provided Trizano with three assists; Trizano has provided Church with four.  So on and so forth.  Just follow the colored stripes to each name.

As you can see, Perri (and to a lesser extent, Church) are at the center of it all for Drexel with respect to this cadre of offensive weapons.