Cornell is sitting pretty atop the Ivy League right now at 4-0, but there's a pretty good race going on in the rest of the conference. Yale and Pennsylvania are locked together at 2-2 and the rest of the league is only a game back in the run toward the fourth conference tournament spot.

What's really interesting, though, is that road teams are having a tough go of it in the league.  Visitors are 4-8 in conference games this season with the Big Red having secured two of those victories.  That's not so hot.

This got me thinking about who has played the best or worst at home and on the road.  To answer this, I looked at each team's efficiency margin* for home games compared to road games.  I then plotted them on a graph (a la Luke Winn) to show the differences. 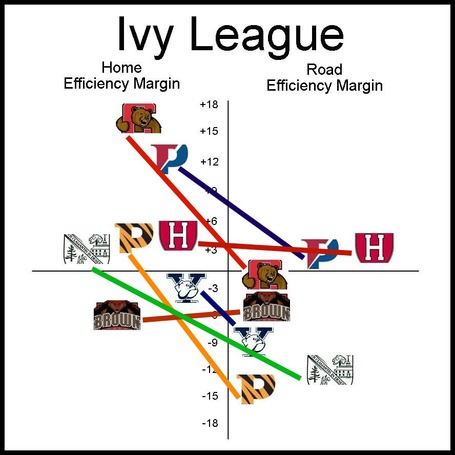 Here's a chart that reflects the actual values:

With the exception of Harvard and Brown (and the Bears aren't really worth excepting given the small difference), nobody in the league has played nearly as well on the road as they have at home.  The gigantic swings for Cornell, Dartmouth, and Princeton are seismic.

Now, there are some important things that should be noted:

Regardless, it's striking how much more poorly Ivy teams have played on the road this year in-conference compared to their home production.  If Harvard hopes to make a move toward the top of the league, it'll need to continue its even play whether hosting or visiting.