THE FACEOFF: 2014 NCAA Tournament Play-In Round

The NCAA Tournament is here and that means special editions of THE FACEOFF are too!

Share All sharing options for: THE FACEOFF: 2014 NCAA Tournament Play-In Round

Congratulations lacrosse fans, we've made it to the NCAA Tournament! I'm sure some of you are reading this and asking "Wait a second! I thought that starts this weekend?" Well, thanks to the NCAA expanding the tournament to 18 teams, today marks the official start of the tournament with the play-in round. The four automatic qualifiers with the lowest RPI rankings will battle it out to make it to this weekend's set of games. This afternoon Bryant, who has been a top 20 team through much of the season, will square off against Siena for the right to play Syracuse on Sunday. Later on in the evening, first-year program Richmond looks to build upon its remarkable story as it heads out to Colorado to take on Air Force, who's looking to continue their own breakthrough season. The winner of that one will take a cross-country flight to face top-seeded Duke on Sunday.

THE FACEOFF is giving you round-by-round access/insight/whatever other buzz words to the NCAA Tournament. As the tournament goes on we'll add some leaderboards and other stats to help you see where the teams fall in line. For now, we'll hit you with some stats, break down the qualifiers, and provide some historical background. We'll emphasize the current, previous, and next rounds for our NCAA Tournament editions, so be on the lookout for another edition later this week. All times on this infographic are Eastern, so subtract two hours if you're looking to catch the games at Air Force or Denver this week. Without further ado, here's our first NCAA Tournament edition of THE FACEOFF for 2014: 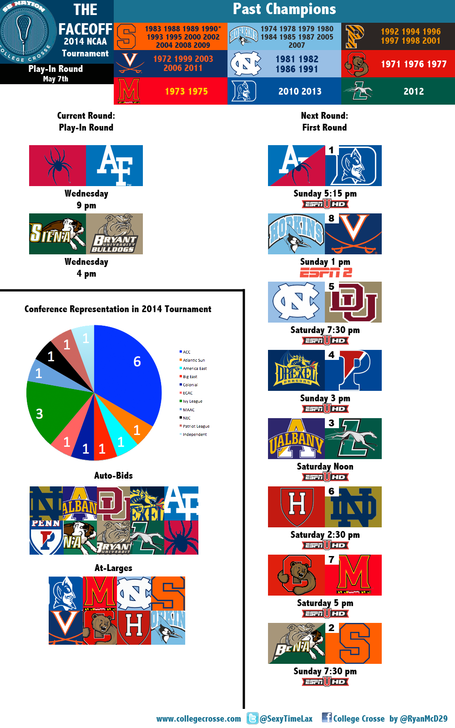 (Click to make it larger. A full bracket can be found here.)