The biggest weekend of the year deserves a nice big infographic. THE FACEOFF is here to help.

Congratulations, lacrosse fans: we've made it! It seems like just yesterday we were sitting out in 20-degree weather with snow falling to get our fix after a long offseason. (Note: Yesterday could very well have been early April given the conditions.) Here we are, now at Memorial Day weekend with just three games left in the year. On the darker hand it sucks that we're only a couple of days away from our beloved sport going into hibernation. The brighter hand? It's the best freakin' weekend of lacrosse around.

The Final Four is all set for Baltimore, where M&T Bank Stadium hosts this year's edition of the NCAA Men's Lacrosse Championships. It's a pretty familiar sight to see who made it, with Denver, Maryland, and Notre Dame in their third Championship Weekends in the last five years and Duke in their eighth straight Final Four appearance. That, however, doesn't mean there aren't a lack of storylines.

Duke's looking to become the first back-to-back champion since Syracuse in 2008 and 2009, as well as win their third title in five years. Maryland is looking to break a pesky 29-year title drought and finally give John Tillman a championship after two runner-up finishes. Denver's looking for their first title ever as Bill Tierney looks to win his seventh championship and first one outside of Princeton. Notre Dame's looking for their first ring as well, which will probably make ND Nation simmer in anger and call for Brian Kelly's head because lacrosse won a title before football did under him.

With both semifinals being rematches of regular season games, familiarity should breed some excitement. It's the final time (for real this time) that the Terps and Fighting Irish square off as ACC rivals, while Denver and Duke add a new chapter to one of college lacrosse's youngest but best non-conference rivalries. So now that we've set the table with all that fun, let's get into what you came for: THE PRETTY PICTURES! It's THE FACEOFF, and it's right here for you: 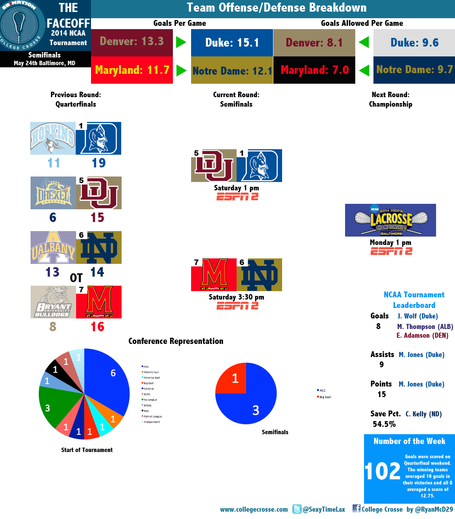 (Click to make it as large as this weekend's going to be! Full bracket can be seen here.)