This is an urgent bulletin.

After Bellarmine dumped Robert Morris, 9-8, this weekend, the Knights really got to work:

*burp* RT @bellarminelax The boys just put down about 100 pounds of BBQ at Selma’s in Moon Township, PA. SO MUCH MEAT #meatsweats

This raises an important issue: Is Western Pennsylvania some kind of barbecue paradise, smoking delicious meats that you can only put down after you've somehow exceeded the physical capacity of elastic waistbands, and I just don't know it? I feel like the cuisine of the Pittsburgh area is basically just a bunch of different foods smashed together on two pieces of bread and you have no choice but to like it. It's still better than British cuisine, though, which is just "boiled everything."

100 pounds of barbecue is a lot -- like, really a lot -- of food. Major League Eating doesn't currently recognize any records in competitive barbecue mastication (which is a stain on American freedom), so I have no idea if people generally eat this much barbecue or if this is an achievement that requires recognition in The New York Times or something. At the end of the day, each player put away about two-and-a-half pounds of whatever was shoved in front of their faces, and the team dietician, when contacted about whether someone should eat that much meat in one sitting, probably shook his head and just said, "I'll send the LifeStar helicopter to Pittsburgh to airlift you knuckleheads home due to incapacitating food-babies." Then again, as a hardcore barbecue fan myself, I am pretty proud of the Knights' effort: 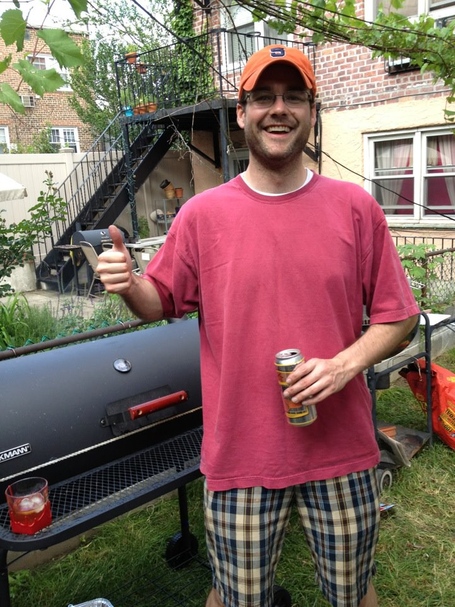 For that cook -- around the Fourth of July -- I made about 12-15 pounds of smoked meat. It fed almost 20 people, and there were leftovers for a few days. I'm not sure I ever want Bellarmine's lacrosse team to show up at my front door and ask if it's dinnertime.

The Knights are now neck-and-neck with VMI as Division I's hungriest teams at this point in the season. Challengers to the throne are always accepted. Let's eat, people. Preferably as Genghis Khan would.