THE FACEOFF wraps up its conference tournament editions with a look inside the Ancient Eight's tournament.

Ever since the Ivy League began to hold a conference tournament in 2010, it's been one of the most exciting parts of championship week. With a combination of national powers and teams hanging by a thread on the NCAA Tournament bubble, there's no shortage of action inside the nation's oldest lacrosse conference.

That will be the formula once again this weekend in Cambridge, as two teams seek a home game in the first round of the NCAAs while two others fight for their postseason lives. Cornell and Penn finished second and third in the Ivy League and both should have a date on their schedule next week in The Big Barbeque. Top-seeded Harvard and their semifinal opponent (and archrival to boot), Yale, square off in what looks like an elimination game for postseason consideration. The winner of "The Game" will then look to knock off the Big Red or Quakers to guarantee themselves an NCAA berth. Also at stake for the Elis is a shot to become the first Ivy League team not named Cornell or Princeton to win three straight conference titles in the NCAA Tournament era. It should be a crazy time between these four and definitely one to watch.

THE FACEOFF concludes its look at the conference tournaments with an edition on the Ivy League. Here's how those smart guys shape up: 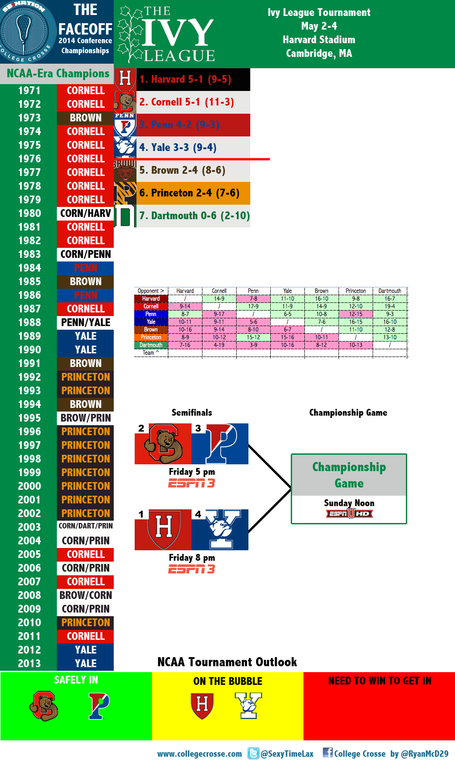 (Clicking it makes it larger than your school's endowment.)