The Pioneers are looking for a new head coach.

Share All sharing options for: Sacred Heart, Mariano Are Seeing Other People

Have you ever wondered what a 30-word press release announcing the departure of a head coach looks like? No? Well, you’re about to:

The Sacred Heart Department of Athletics announced that head men's lacrosse coach Tom Mariano is no longer with the University. The athletic department will begin a search for his replacement.

That's basically the same approach I take when informing my parents that I've broken up with a girlfriend. "Yeah, I'm no longer with my girlfriend. I will begin searching for her replacement." It's short and sweet, mostly because I don't want to deal with the follow-up interrogation -- "When are you finally going to get married?" "Is it because you watch too many cartoons?" "You're a rotten son and are going to die sad and alone." I just don't have time for that nonsense.

Mariano spent about two decades at Sacred Heart and was named this season's Northeast Conference coach of the year after guiding the Pioneers to the league's postseason tournament. His departure from the university is a little awkward -- at least given the truncated announcement -- but regardless of the circumstances, the Pioneers are joining Hobart in the search for a new Imperial Lacrosse Director.

This is normally where I'd stump for myself as Sacred Heart's new head men's lacrosse coach. I mean, if you're going to hire someone, why not hire a wiseass that is woefully unqualified and would replace playbooks with selections from Kafka in an attempt to substitute sound strategy with existentialism in order to win six NCAA titles in just one season. However, I think Sacred Heart has a better candidate already lined up: 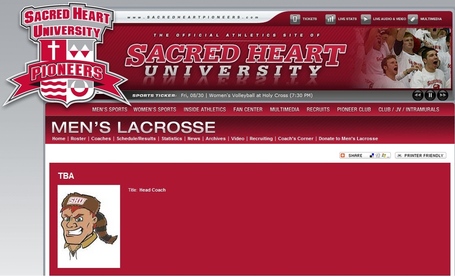 This needs to happen. "Big Red" -- Sacred Heart's mascot since 2007 -- needs to become the new head coach of its men's lacrosse team. Big Red has everything: The intensity to instill fear in opponents and officials; a hat that screams that he likely hunts without a license, the kind of rogue behavior necessary for a Connecticut under-elite to rise to the top; instead of individual teeth he has two large sets of pearly-white dentures, cutting down on costly university-issued dental insurance; assuming Big Red has a musket -- duh! -- he will stalk the Fairfield Stags until they're tuned into jerky in his curing shed; and he probably won't waste his days on Facebook for hours on end because the Internet is scary and weird and he still buys his milk from Earl down at the general store.

Hire your mascot, Sacred Heart. It's the only reasonable thing to do.