Did You See That?!: Important Player Updates

Stuff is happening out there, people.

Share All sharing options for: Did You See That?!: Important Player Updates

Do you read this site's fancy pants links post every day -- "Lacrosse the Internet"? You should; it's kind of the most important thing ever written on the Internet. There are all kinds of good stuff in that daily piece, and rather than watch it exist on the periphery, I'm going to make it even more important than it already is: Every day I'll pull out a story from the links post and expand a little upon it. It's called "Did You See That?!" and it'll happen as long as I remember to write it.

It's barbecue season. I know this because I hauled this angry thing out of storage last week: 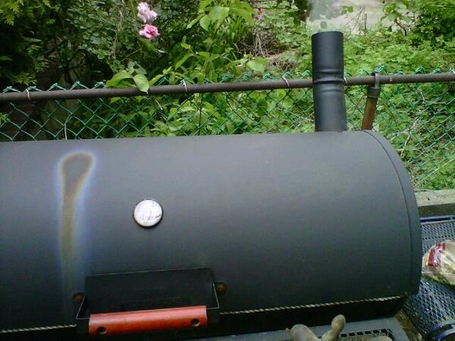 The smoker itself is a piece of junk out of the box. I've had to heavily modify it, and there's still more work to be done (these hands just don't write beautiful words, college boy). The thing does the job, though, making barbecue that makes your face melt and your arteries clog. For the first cook of the season I did a six-pound chicken -- with a special rub recipe that I probably wouldn't tell you even if you were pulling limbs from my person -- and three racks of ribs (half rubbed, half wet). I used apple and cherry to smoke the suckers (I generally don't mix apple and cherry, but I needed to burn through the bag of cherry left over from last season), and served some salt potatoes as a side. It was a beautiful thing, the first step in a summer full of smoking my neighbors out of their apartments for 10-hour stretches.

That's not unlike what's happening to college lacrosse rosters at this point in the year. Like the pace at which I'm fabricating modifications to my smoker to make my meat even more delicious for a season of triumph, teams are seeing their rosters develop and take form for their upcoming efforts. The focus of the summer is often built around recruiting and summer prep showcases, but there are arguably two bigger stories out there: (1) Players transferring to other schools; and (2) Players pursuing or passing on additional eligibility. These are important developments and often carry notable impacts for the coming season.

Terry Foy of Inside Lacrosse recently checked in with four important updates: Princeton's Rob Castelo will not return to the Tigers program for his final season, instead choosing to focus on academics so that he can go to medical school and someday make people sit impatiently in a waiting room before being telling them to just drink some orange juice and suck it up; Duke's Casey Carroll -- who suffered a torn ACL before the 2013 season started in earnest -- is looking for an additional year of eligibility; Chris LaPierre of Virginia was pursuing a medical redshirt (and got it) while attack Nick O'Reilly is off to the adventure of real life and wondering why everything costs so much just to exist; and Cole Yeager, formerly of Yale, decided to transfer to Penn State to take draws for Jeff Tambroni next season. There are two things here that are most interesting to me: Yeager's decision to play his final season at Penn State and Carroll potentially earning another season of eligibility.

As for Yeager, I can't believe he is leaving New Haven, positioning himself hours and hours away from the best damn pizza on the planet: 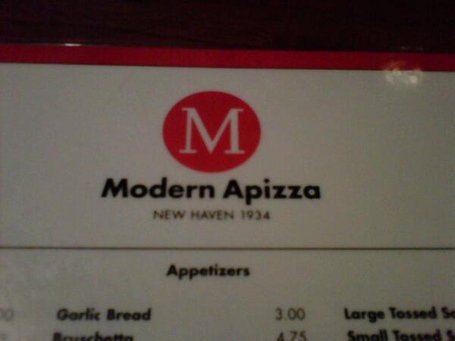 WHY WOULD YOU DO THIS TO YOURSELF?! MODERN'S ITALIAN BOMB IS THE STUFF OF RELIGIOUS ENLIGHTENMENT AND STRENGTH!

Yeager should fit in nicely at Penn State, filling the void left at the faceoff dot due to Danny Henneghan's graduation. The Nittany Lions were fifth in the nation in 2013 in possession margin per 60 minutes of play -- plus-4.68 -- and Yeager, a concrete block of a human, should help Penn State in its effort to dominate the ball (about a third of the Nittany Lions' offensive opportunities last season came from faceoff wins). Yeager also has a very interesting and truthful background.

With respect to Carroll, there would become no better story -- again! -- in college lacrosse than the return of the former Army Ranger. But the thing about Carroll potentially getting back on the field isn't just the emotional narrative of returning after selflessly serving his country and having a first comeback attempt stalled before it truly started; rather, it's that Carroll, despite all the potential rust, could help stabilize what could be a strong Blue Devils defense in 2014. Already returning to that defensive unit (subject to a myriad of developments) are Will Haus, Chris Hipps, Henry Lobb, Luke Duprey, Brian Dailey, and the emerging Kyle Turri between the pipes, all of which played significant time last year and have a summer and fall to continue to grow. Adding Carroll to the mix -- a former first team All American -- eases the losses of Bill Conners, Jimmy O'Neill, and Dan DiMaria. The Devils boasted a defensive unit that ranked 31st last season in adjusted defensive efficiency, but have the potential to be among one of the nation's better units next season. Carroll arguably drives Duke closer to defensive kinetic energy, but the lack of clarity around whether Carroll will have the opportunity to play a final season slows things just a shade.