NCAA Lacrosse Tournament Final Four: The Look of a Champion

Carolina entered the tournament as the team that looked most like the last four national champions. How do the remaining four teams in the field now compare to the last four titlists?

Share All sharing options for: NCAA Lacrosse Tournament Final Four: The Look of a Champion

There are thousands of different ways that teams go about their lacrosse business: hectic tempo versus a pragmatic pace; zone versus man defense; full-field ride versus hunkering back and forcing settled possessions; Canadian-influenced offense versus kind-of-Canadian-influenced offense (we'll all be calling helmets toques soon enough); ad infinitum. There is no magic methodology that brings with it buckets of wins; rather, how teams execute their philosophy often dictates whether exciting Gatorade baths happen instead of punishing wind sprints. It's this idea -- that execution and circumstances drive success -- that supports the notion that national champions, despite their differences in approach, have consistency in production in various facets of play.

It's still unclear what performance metrics are the most relevant areas to which national champions share space, but trends are starting to emerge. Before the NCAA Tournament started, North Carolina looked most like the last four national champions based on a truncated series of performance concerns. With the Tar Heels jettisoned to the cold recesses of space following their loss to Denver in the quarterfinals, the question that dominates this analysis has reemerged: Which of the four teams headed to Championship Weekend look most like those four teams -- 2009 Syracuse, 2010 Duke, 2011 Virginia, and 2012 Loyola -- that have recently turned a victory lap on Memorial Monday?

I went ahead and pulled together the profiles of the four remaining teams in the tournament -- Syracuse, Denver, Duke, and Cornell -- and created a comparison graphic. Ignoring statistical theory because I don't want your brain to explode, green means that current ranking positions are similar to that of prior champions; for metrics where wiggle room seems to exist, the cells are shaded yellow. Here's how everything shook out: 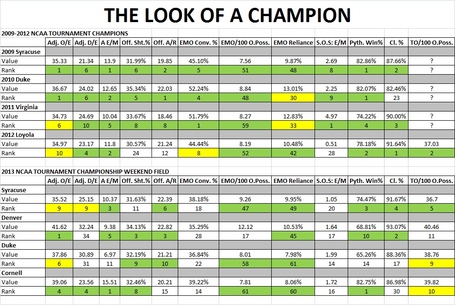