NCAA Lacrosse Tournament: The Look of a Champion

Based on the profiles of the last four national champions, which team in the field looks most like a national titlist this season?

Share All sharing options for: NCAA Lacrosse Tournament: The Look of a Champion

I don't know if a national champion has a particular profile, but that hasn't stopped me from smashing my face against the wall trying to determine if there are flashpoints between titlists throughout the years. Loyola was a bit of an outlier last season compared to the three champions that preceded them, but there appear to be some potentially useful and potentially useless metric point relationships that national champions share:

With that as the backdrop, I went ahead and pulled together the profiles of the 16 teams in the NCAA Tournament and created a comparison graphic. Ignoring statistical theory because I don't want your brain to explode, green means that current ranking positions are similar to that of prior champions; for metrics where wiggle room seems to exist, the cells are shaded yellow. Here's how everything shook out. 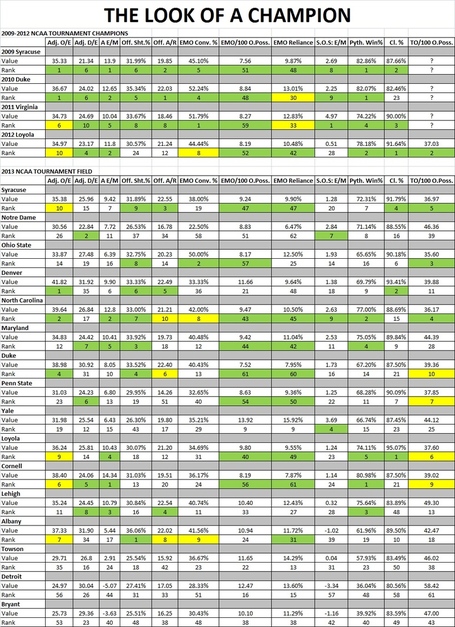 Here's a downloadable .pdf version of the chart.

North Carolina arguably holds the profile closest to that of the last four national champions. The Tar Heels are on point with all the major metrics -- adjusted efficiency margin (basically, how strongly Carolina decimates the competition); the offense is a destructive force without mitigation; the team has played the kind of schedule that hardens eventual champions; the Tar Heels take care of the ball; and, most importantly of all, Carolina is a team that is expected to win a ton of games. Based on their rankings and the rankings of prior champions, the Tar Heels hit the mark more than any other team in the field.

Behind Carolina sits Cornell, Loyola, Syracuse, Maryland, and Duke (probably in that order based on relationships to prior champions). These teams are all national title contenders in 2013, especially because of the leveraged competitiveness throughout the bracket. Importantly, as the postseason progresses, these teams could begin to look more and more like previous champions depending on their round-by-round play. Everyone else in the field is flawed in ways that they'll need to put together unique efforts -- at least based on what the last four seasons have provided as a blueprint for a national champion -- to take scissors to twine on Memorial Monday.

What do you guys think? Are there other factors that should be considered?