The NCAA tweeted this picture yesterday during the Dowling-Limestone Division II final. Those kids are doing the Lord's work, supporting their club by risking skin poisoning to which their parent's medical insurance may or may not cover. Other than making me wonder how and why the mohawk still exists in a contemporary society that punishes anarchy with swift and violent law enforcement "justice," it did revive some memories from 13 years ago.

1999 was a fun year, man. Back then there wasn't any Twitter or Facebook or Google+. (I don't even think there's a Google+ in 2012, if you want the truth.) To get news as soon as it broke and experience things in real-time, you kind of, you know, had to actually go to events and stuff. That year, Syracuse had made what was a pretty impressive run to Championship Weekend, going on a revenge tour that saw the Orange -- under newly-minted head coach John Desko -- knock off Princeton at Brown, drop undefeated Loyola at Princeton, and face-off against Georgetown in the national semifinals (a rematch that would see Syracuse attempt to avenge a regular season defeat at the hands of the Hoyas). Some friends and I had been following the Orange around the northeast during the run and decided to take the trip down to College Park for the Final Four.

Much like today up at Gillette Stadium and last year at M&T Bank Stadium, it was a scorcher on Semifinal Saturday. I'm a New Englander to the bone; approximately four seconds in the sun is enough exposure to my skin to cause it to wish that it wasn't attached to the rest of my body. I had decided, for reasons unknown to me now but probably made sense when I was 18 and had the logic skills of a concrete block, to paint my body to look like an Orange lacrosse jersey. It was a terrible mistake.

As it was so hot that day, I took great care to not have any of the orange, blue, and white paint touch each other, fearing that any sweating would cause the colors to run and make me look like a real rube. The result was little patches of visible skin peeking through the delicate work of art. After about an hour or so in the sun, the paint baked to my skin, making it almost impossible to move. As a true believer in the Orange Empire, though, I stuck it out through Syracuse's 13-9 drubbing of Georgetown.

When we got back to where we were staying, however, I wasn't so much feeling the pain of baked paint sticking to my skin as much as it felt like my skin no longer wanted to exist. After taking a shower and removing all the nonsense on my chest, reality came into full focus: Due to the little gaps of skin between paint colors, I had gotten a "'Cuse" sunburn across my chest -- 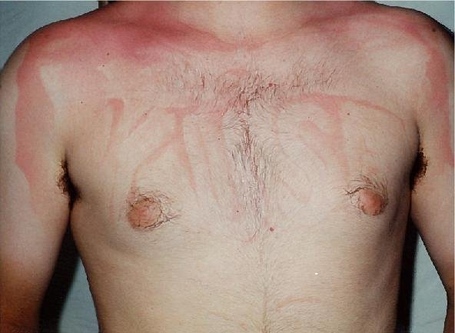 Be safe out there today, boys and girls. And, for God's sake, make sure that you bring some sunscreen or wear a shirt or something.