Dropkick Murphys Song of the Matchup: "Fields of Athenry" because Celtic and a bunch of Republic of Ireland sport teams use it and Notre Dame's like the Ireland team of America. There's also ships by New Haven and the British had control over the Long Island Sound during the Revolution or whatever (probably way off on the Connecticut side but I had to relate it to Yale somehow).

If you would've told me that Yale and Notre Dame would be playing in the NCAA Tournament about two weeks ago, I probably thought you were crazy. Notre Dame had an inside track to a top 2 seed and Yale was looking like the 3rd team in a conference that was at most a 2-bid conference. Then last weekend Notre Dame lost to St. John's and failed to make the Big East Championship Game while Yale continued their winning streak by knocking off Cornell and Princeton on their way to an Ivy League auto-bid. So now we're here. Yale's got the longest winning streak in the nation while Notre Dame has to shake off their loss to St. John's. However, the Irish look like one of the favorites to win the whole thing and a win over the Bulldogs would set the wheels in motion. It's going to be an interesting one in South Bend, and here's how the two teams look. Note the use of both teams not using costumed things for mascots and using real humans/dogs! 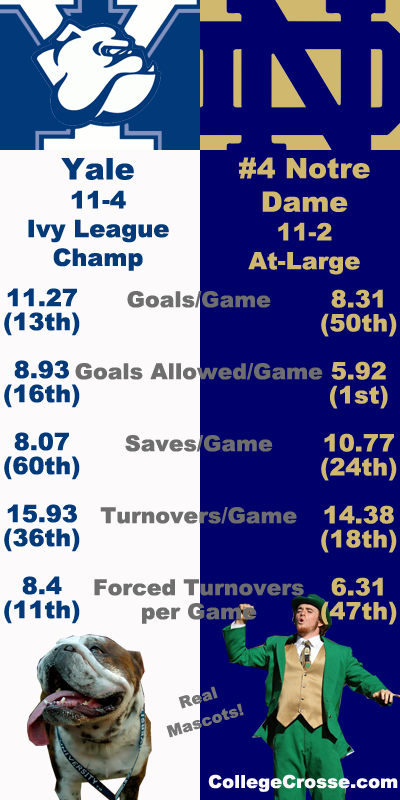