The Internet is telling me through my Internet computing machine that it's the time of year when midseason awards are given to deserving recipients. This is frightening to me on a singular level: Almost two-thirds of the regular season is complete, which means that our conceptual understanding of mathematical application has been blown to smithereens, leading to a tear in the space-time continuum wherein mid-points are now way points farther down the linear model of existence. Or, everyone just needs to generate content this time of year. (Although I feel pretty confident in the former being reality (or, rather, what was once reality).)

The College Crosse midseason awards roll on, highlighting all the important things* that have gone down in the world of Division I men's lacrosse at the two-thirds pole of the season.

* Just kidding. None of these things are important. No doink.

COLLEGE CROSSE AWARD XIII: ACHIEVEMENT IN THE FIELD OF FAILING TO ACHIEVE WHILE WRAPPED IN A COCOON OF PAIN
Winner: University at Albany Great Danes

Albany head coach Scott Marr has a bit of a problem on his hands:

Now, Albany is clearly more talented than your standard one-win, washed-a-red-shirt-with-your-whites mess: All the Thompsons on the roster, Joe Resetarits, and Marr knows the game. What I think is helping crush the Great Danes in the ol' "You are what your record says you are!" department is this:

These are brutal, death-defying schedules that the Great Danes have played recently. Maybe some hammock games for 2013 wouldn't be a bad idea.

There is nothing that I want more than to see Colonials head man Andrew McMinn get a job at one of the blue blood schools and bring his hair-on-fire, let's-play-the-game-like-we're-on-a-rocket-headed-for-the-moon style to the national stage. That would pretty much cure depression in 90 percent of Americans while "The Battle Hymn of the Republic" blasts in the background.

Robert Morris has an understanding of what makes college lacrosse beautiful: They're going to play with tempo (only two teams nationally play more possessions per 60 minutes of play than the Colonials); they shoot the lights out (they're sixth in raw offensive shooting percentage and eighth in the country when you weight that percentage against personnel imbalance situations); they have a couple of individual explosive devices that improvise as well as anyone in the country in Kiel Matisz and Jake Hayes; their offensive mentality of sharing the bean fills your heart with desire and warmth; and an attitude of "This is what we're going to do no matter the class of opponent" that makes you swoon like a sophomore co-ed at the senior ball.

The Colonials are what college lacrosse was, and they are totally comfortable in their own skin. I'd take them all out for turf-and-turf if it wasn't a dirty NCAA violation.

Someone punch the horn and play "Dixie": 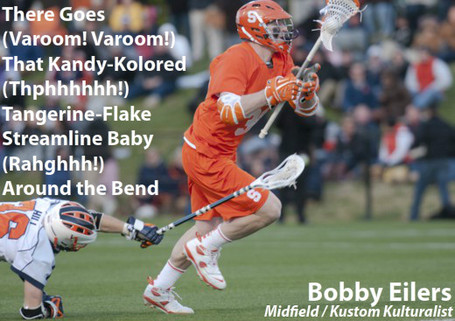 That's all I have for midseason awards. Is there anything else you knuckleheads would like to add?