The Internet is telling me through my Internet computing machine that it's the time of year when midseason awards are given to deserving recipients. This is frightening to me on a singular level: Almost two-thirds of the regular season is complete, which means that our conceptual understanding of mathematical application has been blown to smithereens, leading to a tear in the space-time continuum wherein mid-points are now way points farther down the linear model of existence. Or, everyone just needs to generate content this time of year. (Although I feel pretty confident in the former being reality (or, rather, what was once reality).)

The College Crosse midseason awards roll on, highlighting all the important things* that have gone down in the world of Division I men's lacrosse at the two-thirds pole of the season.

* Just kidding. None of these things are important. No doink.

There have been five games this season in which a player went for double-digit points: Billy Eisenreich against Robert Morris (11); Bryant Neufeld against Hartford (11); Adrian Sorichetti against St. John's (10); Peter Baum against Robert Morris (10); and Rob Pannell against Binghamton (10). Rather than crown the guys that simply generated the most points in a game -- that's old school heart breaking; I'm down with new school heart shattering -- I decided to crown the player that generated the most points on a per offensive possession basis. The winner?

Billy Eisenreich. (Wow. That was an effort in futility.)

There isn't a team remotely close to Bucknell in the "Fun Factor" ratings this season, and that's a little odd given the fact that the Bison were barely in the top-15 at the end of 2011. The "Fun Factor" ratings are just a cockamamie formula that I came up with that measures a team's ability to entertain me: They tend to play with pace, they tend to have an exciting offense, and they tend to be super competitive. At this point in the season, Bucknell's "Fun Factor" rating is at the top of the charts, a whopping 9.2754; the next closest team on the table -- Massachusetts -- comes in at 7.6730. Nobody has shot better than the Bison this year and their seventh-ranked adjusted offensive efficiency value makes me want to dance the night away.

They are adorable to the max, and I lust for more hot Bucknell action from Eisenreich, Heritage, and Company for the rest of the season.

More after the jump.

Not cool, Manhattan. You just don't score two man-down goals in a game against Wagner. That's like asking a kid with no arms to throw the ball at your harder when you're playing a game of "catch/throw the ball at the kid with no arms and watch him bruise." Only Detroit has yielded as many man-down goals this season as Wagner -- each are now saddled with three, which must be a joy to watch during film sessions that double as faceplam practice -- and if you're going to drop 20 on the Seahawks -- that's first-rate jerkface jerking in and of itself -- throwing in two man-down buckets is trolling at the highest degree.

When the machines revolt against their human masters, we will eventually become one with our gadget and vacuum tube overlords. Luckily, Rob Pannell has already shown us what our future holds: 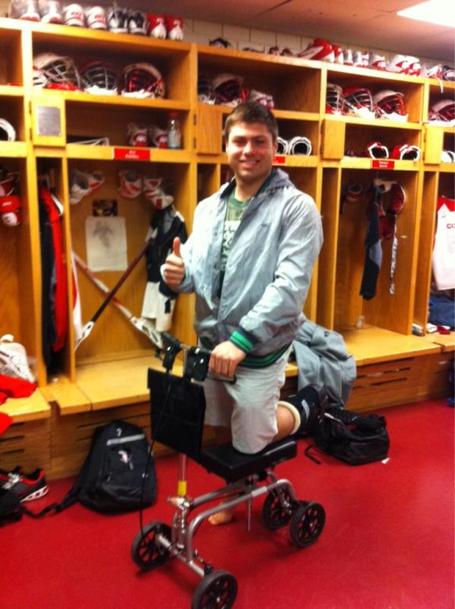 I won't miss you one bit, wind sprints. I accept you with open arms, press-the-button-and-ride-wild sprints.