(Am I crossing over a college football personality with lacrosse? Yes. I've got nothing better to do tonight.) 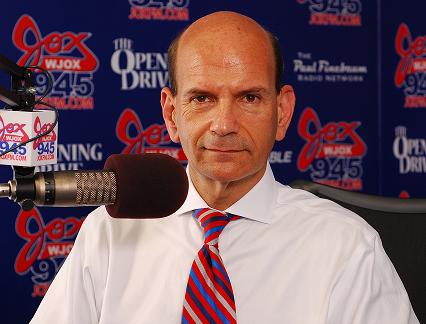 Looks like your best bet will be the Harbor Tunnel come rush hour. We'll have another traffic update for you at the bottom of the hour here on W-L-A-X AM Baltimore

He's one of Inside Lacrosse's Top 5 Radio Personalities in Lacrosse.

The Syracuse Post-Standard calls him the most powerful name in college lacrosse.

Newsday says he's the ACC and Ivy League's go to source for all things lax.

Dave Pietramala has personally banned him from Homewood Field.

Broadcasting throughout the lacrosse hotbeds of the Mid-Atlantic and Northeast.

This . . . is the Paul Finebaum Radio Network!

Welcome to today's show. We've got a lot to talk about! Later on we've got Quint Kessenich talking Big City Classic and we've got a roundtable discussion on Hopkins and Maryland with the Baltimore Sun coming up, but as usual we'll start off with calls from our audience.

We'll start off right here in Baltimore with Tom. Tom you're on. . . .

HEY PAWWWWWLLLL DID YOU SEE THE JAYS BEAT THE HOOS OVER THE WEEKEND?

WELL NOW ALL THE HATERS HAVE NOTHING TO SAY. THEY SAID WE COULDN'T BEAT PRINCETON IN RECENT HISTORY. WE BEAT THEM. THEN ALL THOSE ORANGEMEN THOUGHT THEY CAN PULL IT OFF AND THAT WE COULDN'T BEAT THEM ANYMORE . . . WELL, I TELL YOU WHAT WE SENT THEM ORANGE BACK TO CANADA, ALRIGHT. AND NOW THEY ALL SAID WE COULDN'T BEAT UVA ON THE ROAD. WELL, LOOK AT THE POLLS, ACC COUNTRY: WE'RE #1 WITH A BULLET. TERP FANS . . . I DON'T EVEN WANNA HEAR A SINGLE WORD FROM YOU CAUSE ALL YOU GUYS ARE DOING IS PUNCHING GUYS IN THE FACE. BUNCHA SORE LOSERS! 33 NATIONAL TITLES PAWWWWLLL AND WE'RE GONNA MAKE IT 34 ON MEMORIAL DAY I'M GONNA HANG UP AND LISTEN. GOOOOO, HOP! GOOOOO!

Well, Tom, you are right. The Jays are looking real good this season. They've got UNC this weekend up in the Meadowlands and they should be able to pull that off. And you're right: Hopkins did have some major humps to get over but they overcame history and they've beat the three teams that have had the championships with them. Next we'll go to Sally in Chevy Chase. Sally. . . .

I GUESS TOM DIDN'T GET THE MEMO. THOSE JAYS HAVEN'T FACED US TERPS YET. I CAN'T WAIT TO LAY THE BEAT DOWN ON THEM AND WE'LL SEE THEM ALL CRYING BACK TO THE LOCKER ROOM WITH A BIG "L" ON THEIR RECORD! NOW, I DO HAVE A BIT OF AN ISSUE TO TALK TO YOU ABOUT PAWWLLL.

Now wait a second. Your defenseman was the one starting that whole mess. . . .

WELL, THAT MCBRIDE KID HAD IT COMING! MARYLAND'S GONNA BE GOING WAY FURTHER THAN UNC THIS YEAR, ANYWAY. BESIDES, WHO MADE THE NATIONAL TITLE GAME LAST YEAR? US! WHO WAS WATCHING IT FROM HOME? UNC . . . AND HOPKINS, TOO, FOR THAT MATTER! OH, AND I KNOW SOME UMASS PEOPLE ARE COMPLAINING THEY AREN'T RATED HIGH ENOUGH. WELL, NEXT TIME JOIN A CONFERENCE LIKE OURS! AIN'T NOBODY GONNA TOP THE ACC! LET YOU GUYS HEAR IT: AY-SEE-SEE! AY-SEE-SEE! AY-SEE-SEE!

NO, I KNOW THAT MARYLAND'S GOING ALL THE WAY THIS YEAR, PAWWWLLL! DON'T LET ALL YOUR HOPKINS CALLERS FOOL YOU!

I dunno what those Maryland callers are thinking, PAWWWWLLLL, but you know where all of the ACC's getting their players? Hell, even some of Hopkins' players? Long Island. I don't see that Maryland hotbed producing like us here on Strong Island are. Ever hear of Rob Pannell?

Well, he is hurt but when healthy he's one of the best in the nation.

YEAH, LONG ISLAND PRODUCT, BABY! I was at my son's tournament in Pennsylvania over the weekend and them Maryland boys ain't got nothin' on LI! The whole final four was filled with Long Island teams. Let all of them tell you what you want to hear, PAWWWLLL, but nobody's touching Long Island! We got the best players and ya'll just don't want to admit it.

Well, I won't touch on this for now, but I'll chime in my two cents once summer tournament season comes by and we've got nothing to talk about. Let's just say you won't like what I have to say. Next we've got Charles in DeWitt, New York. Charles?

Yes, PAWWWLLL. Long time listener first time caller. I'd like to talk a bit about Syracuse's struggles as of late.

You see, we shouldn't be losing to Villanova. That was a disgrace out there and our face-off boys really need to work and we need to score and stuff. Everybody looks flat out there.

Well, I would say it's because they've got a lot of young players and mistakes are bo . . .

Now, we got Duke and Princeton and Cornell ahead. If we don't win two out of those three, things are gonna get real bad and . . .

Now, I wouldn't say it's dire if they can rack up one of those three and there is the Big East tourname . . .

Well, I think it's time to get rid of Coach Desko. We need some new blood here in the 'Cuse because we can't win face-offs and we're losing to Villanova now and we haven't been to Memorial Day Weekend for two years now and it's looking like it's going to be three . . .

So, you're saying Syracuse should get rid of a multiple-national championship winning coach because the team is going through some growing pains and is in a bit of a rebuilding mode? That's ridic . . .

NOW, PAWWWWLLLL, WE DON'T REBUILD HERE IN SYRACUSE; WE RELOAD!!! THERE'S NO EXCUSE FOR THIS YEAR'S TEAM AND IF WE DON'T MAKE THE TOURNAMENT I WANT DESKO OUT! HE CAN GO DOWN THE ROAD TO GENEVA AND COACH HOBART. HELL, HE CAN GO TO GEORGETOWN FOR ALL I CARE. HIS TIME HAS PASSED AND THAT'S ALL I GOTTA SAY!

Hey, PAWWWLLLL, I wanted to talk about Princeton because you always neglect to talk about the Tigers. If you ever talk Ivy League it's Cornell this and Cornell that and that's only when you're not talking about Hopkins or the ACC.

Hey, now that's not true at all.

Just yesterday we had Tom Schreiber on the show calling in and we've done a few stories already on how the Tigers are playing for Coach Bates' son this season after his wife passed away.

Well, I still think you're not giving us enough credit. We all know you're in Johns Hopkins' payroll, PAWWWLLLL, and you're just too afraid to admit it!

That's not true at all.

Baloney! Everyday you're talking Hopkins non-stop and you're right there with Inside Lacrosse kissing up to Pietramala so he can come on your show all the time. Come May, though, you're gonna see the Ivy League come out on top and I wouldn't doubt it if our Tigers can upset those Loser Jays the second time around.

We've got time for one more caller. Tammy in Durham, you're on the show.

HEY PAWWWWLLLLL I WANT TO PLAY A GAME WITH YOU

OK, what is this?

IT'S CALLED GUESS THE MASCOT!

I'm going to go with a Johns Hopkins Blue Jay.

Right! Now how bout this . . . MWAHAHAHAA

RRRRRRROOOOOAAAAAAAAAARRRRRRR I HATE TRAFFIC ON THE L.I.E.