All of these equipment manufacturers -- STX, Cascade, Nike, Maverik, etc. -- are all pumping out some pretty cool stuff each year. The problem, though, with all of their products is that they're just so pedestrian. Offset heads, new concussion-minimizing features, breathable athletic apparel . . . I've seen it all before. Where's the innovation, man? Where's the stuff that will totally change the game and send it beyond the dimension we're already in?

Luckily, I exist to solve this stagnation in innovation. Not only am I an accomplished writer, I am also one of the nation's foremost authorities in methodological engineering. It's true! I was the first person ever to graduate from Syracuse University with a quadruple-major in Biological Engineering (B.S.), Mechanical Engineering (B.S.), Creative Writing (B.A.), and Eating Triple Cheeseburgers in the Dining Hall (B.A.). Thus, I am uniquely positioned to provide some forward-thinking equipment innovations that would push college lacrosse to limits that we couldn't have imagined just a few years ago.

Below are two ideas that I wrote on a napkin during breakfast. They're both really good, but they do have some negatives to balance out the positives. Please don't steal these incredible innovations from me; I obviously need to iron out some of the kinks and, of course, these are functionally my retirement funds and those patents are going to pay huge dividends for me down the line.

Have you ever been playing against a scrambling midfielder late in the game, him trying to burn out the clock and you trying your best to dislodge the ball to give your side one last shot at a goal? You're not alone, friend. The inner monologue that you have is no different than the one that everybody else has at that very moment: "Man, I can't seem to get the ball out of his stick. If only I had a tire iron this would be so much easier."

Well, contemplate with fret no longer, champ. I am proud to present the College Crosse Six-Foot Defenseman's Tire Iron. This isn't just a shaft to attach to your head; rather, it's the complete crosse itself. With innovative and patent-pending "No Head; It's Just a Five-Pound Tire Iron" technology, the College Crosse Six-Foot Defenseman's Tire Iron is sure to revitalize the entire "Takeaway Defenseman" genre of player.

Will surely dislodge the ball from any opposing player's crosse; will likely dislodge knuckles from opposing player's fingers; no more wasteful time spent stringing your head with shooting laces and fancy mesh patterns; great for getting the opposing trainer's attention; pointy end makes poke checks all that more effective; if you stick it through your belt loop you look like a member of the Musketeers of the Guard if the Musketeers of the Guard were day laborers.

Another genius example after the jump.

You obviously need a helmet to protect your melon, but the cage can be a little unwieldy and peripheral vision is always a chore. With safety features as a primary consideration, look and feel as secondary concerns, I am proud to present the College Crosse RoboCop Melon Protector: 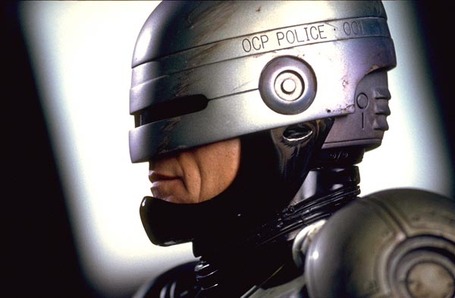 Needs to be screwed in a player's skull, which could be somewhat painful and eliminate dating possibilities due to the full-time nature of the helmet; utilization prerequisite is complete mutilation of the human body, preferably by shotgun blasts and a pistol shot to the skull; probably isn't legal; crime detection sensors may force a player to leave the game and rescue damsels in distress in the crowd; really restricts the possibility of hair flow.

Pretty good, right? What do you guys have in the innovation department? The comments, they are yours.