College Crosse contributor RyanMcD29 thought, "What can be better than a conference championship? Two of them!" So he went to the ECAC and Ivy League Tournmanet finals.

What happens when you have no finals left to study for, you've got a week to kill before graduation, and you have permission from your friends to use their cars? You go to lacrosse games. And not just any ordinary lacrosse games, we're talking conference championship lacrosse games.

Over the weekend I went to both the ECAC and Ivy League Tournament finals. It was my first trip over to Hobart and my second of the season to Cornell. It also added some variety to my lacrosse viewing, as I got to see Denver, Ohio State, Princeton (of the men's variety), and Yale in-person for the first time all season. I've also never been to a conference tournament championship before, as the CAA championships were always on a school/lacrosse practice night when I was in high school at Hofstra. I was going to see some hardware getting raised! Heading into the weekend, I was extremely excited, and in the end I had a ball. But before we get started . . . 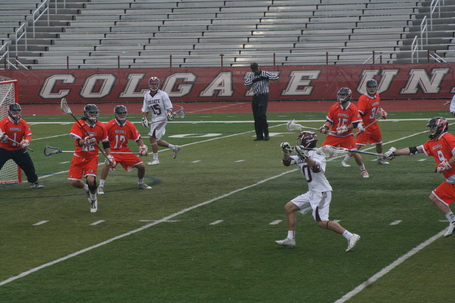 A few weeks earlier I visited Colgate for the first time to check out Peter Baum and the Raiders square off against the Bucknell Bison. I was going to have a writeup about this game but the end of the semester backed me up a bit. Hindsight is 20-20, and neither team made the NCAA Tournament, but at the time Bucknell picked up a big road victory and it seemed to give them momentum for the Patriot League Tournament. (SPOILER ALERT: It sort of did (but not really) as the Bison lost to Lehigh in the championship game; Bucknell would ultimately become one of the first teams out of The Big Barbecue.)

The game was pretty competitive, but Bucknell's diamond shined more brightly than Colgate's on a somewhat snowy day in Hamilton. Colgate, who had a magical 2012 that was capped off with an national quarterfinal appearance, was not as spectacular in 2013 and this game was a microcosm of that. Bucknell's defense shut down Peter Baum, the 2012 Tewaaraton Award winner, and the Raiders didn't help themselves with a myriad of unforced turnovers. The Bison, on the other hand, took advantage of the Raiders' struggles and pulled away toward the end. It was clear that the Patriot League would have to run through either Bucknell or Lehigh, and in the end the two would face off for the conference title. The Bison were on the short end of that game, but on this day -- in the middle of nowehre -- they looked like a strong contender for the conference crown.

To the ECAC Championship 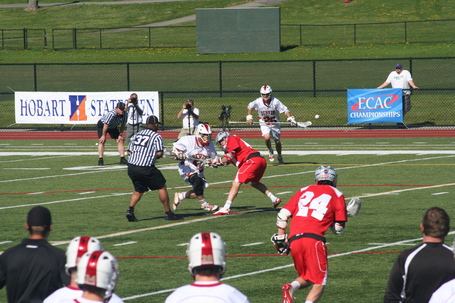 On Saturday I headed over to Geneva to see Denver and Ohio State meet for the ECAC title. Both teams were safely in the tournament to begin with, but this one was a matchup featuring plenty of intrigue. The Pioneers were in the discussion for the number one seed in the NCAA Tournament and the Buckeyes, coming off their upset over Loyola, were looking to send another shockwave through the college lacrosse landscape.

I stuck around for the end of the Big East Tournament final before making my way to Hobart. The ride to Genevea is, well, really simple from Syracuse: The New York Thruway, thanks in part to it being a toll road, is a nice easy drive with very little traffic. It's also quite straight. Thus, this was a nice, relaxing ride through the Erie Canal region of the Finger Lakes. Upon seeing Seneca Lake on Route 14, I knew I was close to Hobart. Sure enough, I was there in a flash and all prepped for an evening of lacrosse. 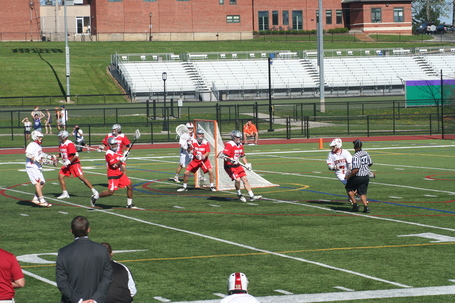 As for the game, it started off with some good defense with both goalies making some solid saves and defenders forcing a a few turnovers here and there. Ohio State struck first with a pair of goals, but the rest of the game was more or less a call and response type of an affair. While Ohio State would occasionally grow their lead or Denver would string together a few goals in bunches, a lacrosse version of "anything you can do, I can do better" broke out.

The second half saw the pace slow down quite a bit, but the two remained close and set the stage for another great ending to what was a pretty crazy week of lacrosse: In the final minute, the Buckeyes scored the go-ahead goal to push them ahead, 11-10; the ensuing faceoff saw the Pioneers with the ball, which caused LEVITTOWN NATIVE (had to throw that in) Bill Tierney to call a timeout to draw up a play; Denver attacked the crease, but Greg Dutton made the final save of the game and sealed the deal for Ohio State, giving the Buckeyes the conference title. 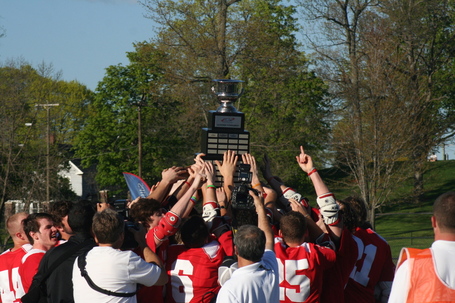 As I said earlier, both teams were more or less guaranteed a spot in the NCAA Tournament. Ohio State, however, upped its program prestige by beating both Loyola and Denver -- in a tournament setting -- to grab arguably the toughest auto-bid that was on the line. The NCAA rewarded Ohio State handsomely with a three-seed; the Buckeyes could very well be a threat to get to Championship Weekend (though a very tough matchup with Maryland or Cornell lies ahead the Buckeyes get past Towson). Although Denver didn't win, they also looked strong and are now headed to The Big Barbeque as a four-seed. Both teams brought their A-game to Geneva and should be fun to watch these next few weeks. 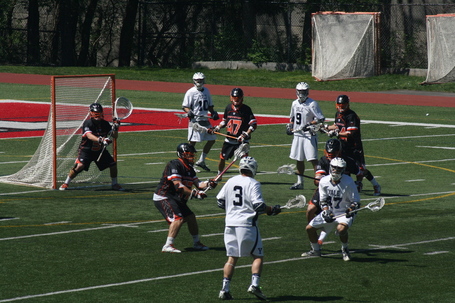 About 14 hours later it was back on the road to go down to Ithaca to see Yale and Princeton battle for the Ivy League title. I won't write about the ride down because I already did that last month. The game, on the other hand, provided plenty to write about. After Princeton knocked off Cornell, Princeton-Yale held all kinds of bubblicious permutations: Yale seemed safely in the national field after beating Penn on Friday night, but a conference title would relieve them of quite a lot of sweat; Princeton, on the other hand, had grabbed a huge victory but still needed to win on Sunday to have a realistic shot at making the tournament thanks to their loss to Dartmouth a few weeks earlier. This game was going to break some hearts and bring some joy either way it shook out, and what transpired essentially made it into an NCAA Tournament play-in game. 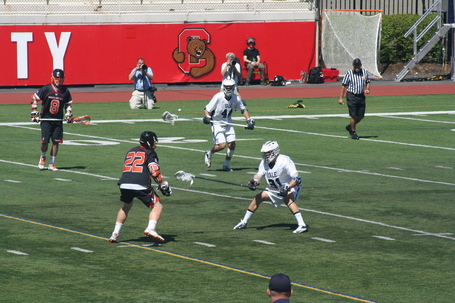 The Tigers struck first with two goals at the beginning of the first quarter, but the Bulldogs dominated from that point forward. Yale more or less controlled the game thanks to winning the battle at the faceoff X, which gave them the ability to run long possessions and get good looks. On the flip side, Princeton was a bit sloppy with the ball and were often one-shot-and-done. As a result, the Elis grew their lead in the first half.

Princeton came back to tie it up after a roaring start to the third quarter, but Yale went back to dictating the tempo of the game once the Bulldogs earned the lead back (7-6). After another quarter of basically dominating how the game would be played, Yale would come out the victor, a 12-8 win for the Elis. That would seal up their second straight Ivy League Tournament title, an auto-bid, and Princeton's fate. 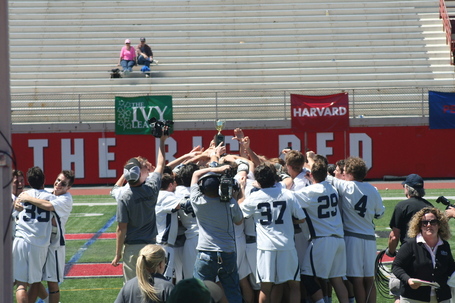 Yale did something not very many people thought they would do -- win the Ivy League Tournament crown two years in a row. Of course, it could have been very different for the Bulldogs had Princeton not done the dirty work of knocking Cornell out of the conference playoff, but Yale managed to pu down a fired up Princeton squad -- a team stuck on the bubble in both 2012 and 2013 -- looking for a big win. Don't be surprised if Yale's a bit of a Cinderella this year. Penn State's got a bad loss against Towson on their mind and with Syracuse's track record against inferior opponents this season, it might be possible for the Bulldogs to head to Philadelphia for Championship Weekend. As for the Tigers, their season was defined by the loss to Dartmouth. Two one-goal losses to number one North Carolina and number two Syracuse may have also made a world of difference. However, I think this season's disappointment in Princeton can lead to big things for the Tigers next season. With all the talent they return, plus the sting of being left out this season putting a chip on their shoulder, the Tigers might be one of the most dangerous teams in 2014. 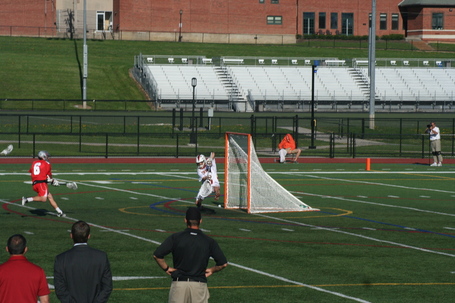 The atmosphere between the two venues varied. The scene at Hobart was rocking, with both Denver and Ohio State fans making a ton of noise and banging their feet on the aluminum bleachers. It a festive place to be. Disappointingly, it was not as great of an environment in Ithaca, almost certainly due to the lack of Cornell playing. Princeton and Yale each had a good turnout from friends and family, but the locals didn't really show up as well as the ones in Geneva had for the ECAC Tournament. That's probably one of the risks of having the top seed host these these tournaments -- as there's not much time to plan a trip on a whim, if the host gets knocked out attendance may suffer. Both schools did a great job of hosting the tournaments, but the time in Geneva was more fun than the one in Ithaca. Of course, having a down-to-the-wire game also helped things a bit.

I was able to see three tournament teams when all was said and done. It should be fun watching all of them after seeing them right in front of me. As for me, it's time to wrap up some things for finals week and then it's on to graduation and seeing my first ever sporting event as a graduate (GULP!) -- Syracuse-Bryant in the first round of the NCAA Tournament.