College Crosse contributor RyanMcD29 went to some games this past weekend. Here's a look at his experiences at Syracuse and Cornell.

Heading into my senior year at Syracuse, I was looking forward to the last weekend of the regular season to pull off the ultimate lacrosse day. In the afternoon, I’d head down to Ithaca to see Cornell take on their bitter Ivy League rival, Princeton. Later that evening, it would be back in the Carrier Dome to watch Syracuse square off with Notre Dame. The Big City Classic made that task easier but at the same time a lot harder this season with the games being held outside Central New York. (I'm still contemplating making the trip, it will just depend on expenses and stuff.)

So, the next best thing was to pull off a two-day stretch between Syracuse and Cornell, throwing in a bonus women's game one of my good friends was playing in. If I wanted to visit Schoellkopf before I graduated, this was my last best shot: With Cornell not having any home games in the month of April, and my plans to head to Geneva for the ECAC Tournament rather than Ithaca for the Ivy Tournament (should Cornell earn the top seed), I was running out of opportunities. The matchups weren't sexy by any means -- Syracuse-Canisius and Cornell-Dartmouth, respectively (if anything, the women's game between Cornell and Princeton would be the best bet of the three), but it made for what lacrosse fans love about the sport: Being able to catch a few games on the weekend, seeing teams of all different shapes and sizes. 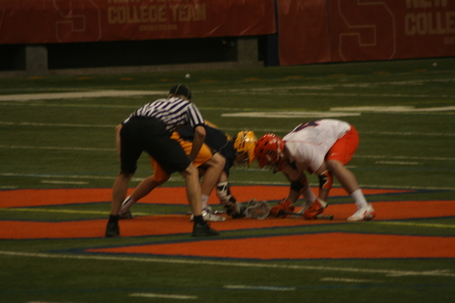 There's nothing quite like starting your weekend at a lacrosse game at the Carrier Dome. The Orange had lost the week before against Villanova, so Canisius would serve as a game to get everyone back on the same page, trying some new things, and getting prepped for the following week's big matchup against Princeton. That being said, given Syracuse's losses on the season, nothing was guaranteed.

Then again, this one was pretty guaranteed right off the bat. Syracuse flat-out dominated from the beginning and it looked like the Villanova loss was just a bump in the road. The great all-around play from the St. John's and Johns Hopkins games was back in full force and gave Coach Desko some good looks heading into the tough Ivy stretch lying ahead. Canisius, to their credit, kept playing hard even though it was certainly looking like a blowout from the start. With conference play still at its early stages, the Griffins can use this game to try and create a turnaround considering Syracuse was the toughest team on their schedule. Granted, with just one win at this point, they’ll need to turn things around quickly.

As for the fan experience, the crowd was a bit small by Syracuse's standards. Of course, it wasn’t a high profile matchup by any means and everybody in the Salt City still has basketball on their minds. It was also a little disappointing not seeing many students there (student attendance at Syracuse games traditionally isn't too high in the first place) given the fact it was a Friday night game. (Note: Please do come out to the Cornell game.) 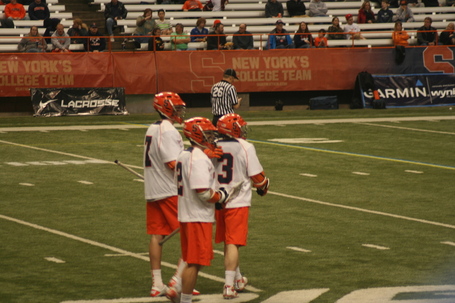 But , by halftime, my friend Matt and I -- who go to all the home games together -- decided to talk a little about lacrosse. Specifically, the controversial new stall-ball rule. Although we both love the new rule, we felt there needs to be clock shown on the field so it’s more clear for offensive players to know how much time is left. Other than that, we talked a little about the growth of the game, attendance issues, and how the box is more or less useless besides for clears. Oh, and we put on NCAA March Madness Live on my iPod when Syracuse decided to bastardize the shot clock by just simply running out the timer and turning the ball over. Sounds like we’ve found a bit of a loophole, haven’t we? 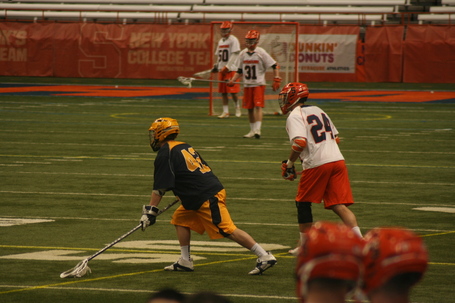 In the end, Syracuse won the game 17-5. A good showing for us Orange faithful and we left the Carrier Dome happy. But unlike most of the crowd, a whirlwind weekend of lacrosse was just beginning.

It was time for a nice little drive from Syracuse to Ithaca. The trip on I-81 and NY-13 is picturesque. To add to the atmosphere, however, I burned a CD of the FIFA 13 soundtrack because it is the best thing ever and don’t tell me otherwise. So yes, blasting out Metric in the Southside of Syracuse, Miike Snow in Preble, and literally singing along to Youngblood Hawke in between Dryden and Ithaca is the coolest thing you can possibly do. (Speaking of Dryden, talk about the biggest speed trap ever. It’s 55 MPH after Cortland, then it OUT OF NOWHERE goes to 30 MPH in the village of Dryden, then back to 55 when you leave it. Saturday morning traffic in Cortland is also like that of Long Island, which makes sense because all of Long Island goes to SUNY Cortland.)

The trip was really smooth until I hit the Cornell University parking garage. About that: It’s very convenient in that it’s right next to Schoellkopf Field. It’s inconvenient in that I had no idea if they actually followed the permit procedure they have in place until I was halfway in the garage (and that I had to drive around for 10 minutes looking for a spot and making tight U-Turns in traditional parking garage fashion. But I found myself a good spot at the end of a level and was on my way for an afternoon of lacrosse. 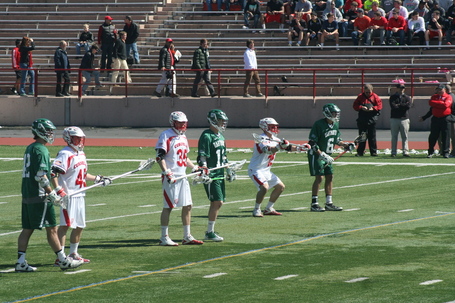 I got into the stadium just in time for the national anthems (yes, anthems; Cornell plays "O' Canada!" which is fun) wearing, well, something you probably shouldn’t show up to Cornell in: Due to crippling superstitions during Syracuse’s NCAA basketball run, I was wearing my Syracuse basketball jersey and a hat. Welp, that’s strikes one and two. Ball one was the fact I was wearing Long Island high school lacrosse pants, but strike three was the fact that I had a sign for Princeton for the next game. Whoopsie-daisy. Luckily, Cornell fans were courteous enough to let this slide. A week-and-a-half from now they wouldn’t have. I took my seat on a beautiful day to watch some lacrosse and hoped that I wouldn't get "safety school" remarks barked toward me. 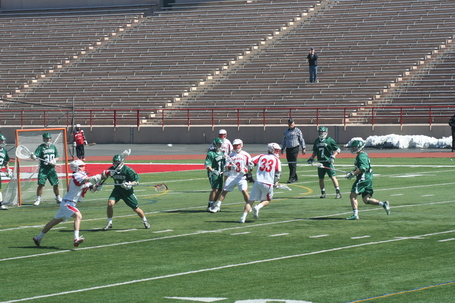 As for the game itself, well, let’s just say that it was a repeat of the night before. Cornell got off to a very fast start and never stepped off the accelerator. If there’s one observation from this game, other than "No, Dartmouth, you can’t be involved in the crazy conference title race," it's that Cornell’s offensive output is deep. Rob Pannell didn’t score until the third quarter. The Red were already well into double digits when that happened. Connor English was putting on a show in the first half and his teammates were assuring that they would do the same. Needless to say, this song would be played:

Over. And over. And over. And over again. 21 times in fact (with the pep band right next to me, no less). Dartmouth got a couple goals here and there, but the Big Red just dominated the game. They one-upped Syracuse’s offensive output and won the game 21-5. While checking updates on Twitter for other games (okay, and the Tottenham score), I saw St. John’s was on its way to pulling off the upset over Notre Dame. Cornell sure as hell looked like a top-two team, and with the development in South Bend, it was a guarantee they’d be back in that position. 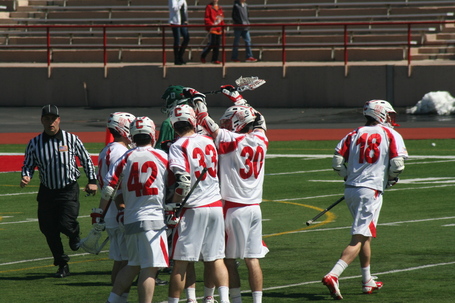 Although I am a Syracuse student and fan, I have to say Cornell is going to be one scary team to watch in May as long as everyone stays healthy. Last season their year was derailed after a rash of injuries. Should everyone keep on keeping on, however, this team easily can end their national title drought. 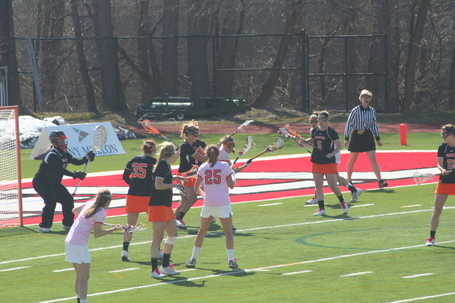 Okay, okay, okay, College Crosse doesn’t dabble into the women’s game. But this fits into the narrative of "EPIC LACROSSE WEEKEND LOOK AT ALL THE GAMES I WENT TO." So after a walk across campus to add another magnet to my refrigerator college magnet collection, it was back to Schoellkopf for a little women’s lacrosse action. After going to last year’s national championship game, I was pretty disheartened after Northwestern basically stood in place on their way to a national title (so . . . stall-ball controversies are rampart here, too, I guess). I had always supported the girls back in high school and the game wasn’t as bad in my mind as other people feel it is, but that night in Stony Brook made me want to hate it. Thankfully, the ladies of both Cornell and Princeton changed my thoughts around a bit.

Before the game began, THE CORNELL PEP BAND WAS BACK. So, essentially, after hearing "Give My Regards to Davy" enough times drin gthe first game to make my brain fry, I would have to endure another hour-and-a-half of it. I'll give them props for showing their support for the ladies, but man, I was destined for PTSD by the end of the afternoon.

It was a back and forth game all afternoon, and quite frankly held my interest even with the Syracuse-Marquette basketball game getting underway late in the second half. I had a fun time sitting with the Princeton parents, who did some zany things like pushups after goals and dressing up in tiger costumes and stuff. The Cornell faithful also had a pretty good turnout as well. In the end, the Tigers ended up with the 12-10 win after a huge defensive stand in the final minutes. It ended up being a happy occasion for me, as I got to see my friend play a critical role in preventing the Red from scoring any goals in Cornell's comeback. After a little talk with her and her parents, it was back up to Syracuse.

Yeah, this is kind of obligatory for any account of any Syracuse anything this past weekend. On the way home I turned on the radio to hear Syracuse basketball’s Elite Eight game against Marquette. I got back to the university in time to catch the end of the game and see the Orange punch a ticket to the Final Four. It was just plain awesome to see them make college basketball's final weekend in my senior year after so many close calls the first three years I was here. And in the end, it served as a perfect ending to a perfect 24 hours of lacrosse across Central New York.