This is probably the only storyline you've heard all week in the lacrosse world. Thus, we're here to mix things up and give you a pretty picture for it.

Well, congratulations -- you're a lacrosse fan that isn't living under a rock and/or haven't been able to avoid the constant nostalgia that has been brought up since 3 P.M. on Sunday afternoon. This Saturday, Bill Tierney and his Denver Pioneers will face off against the Syracuse Orange for a berth in the national title game. It's a matchup that harkens back to the glory days of Syracuse-Princeton, a rivalry that almost guaranteed a Memorial Day Weekend showdown. The chess match between Tierney and either Roy Simmons Jr. or John Desko became a cornerstone of great lacrosse games of yesteryear, but it's now a part of the present, finding renewal this weekend in Philadelphia.

Personally, this is a conflicting showdown. I'm one of two things: a Levittown, New York native and a Syracuse University grad. Tierney is our loyal lacrosse son here in Levittown, a beacon of lacrosse hope in a baseball-driven community (and even a former coach at our (now no longer used) high school). On the other hand, Tierney is arguably coaching-public-enemy-number-one at Syracuse for his legendary battles against the Orange when he was at Princeton. So . . . hooray personal emotional struggle! (And a fun one to watch for you, the lacrosse fan, as well.)

Here's a little infographic with facts and figures about Tierney's career against the Orange. Although the storyline has shifted around a bit, his presence at Denver has opened up a whole new chapter in this great coaching rivalry between him and Coach Desko. 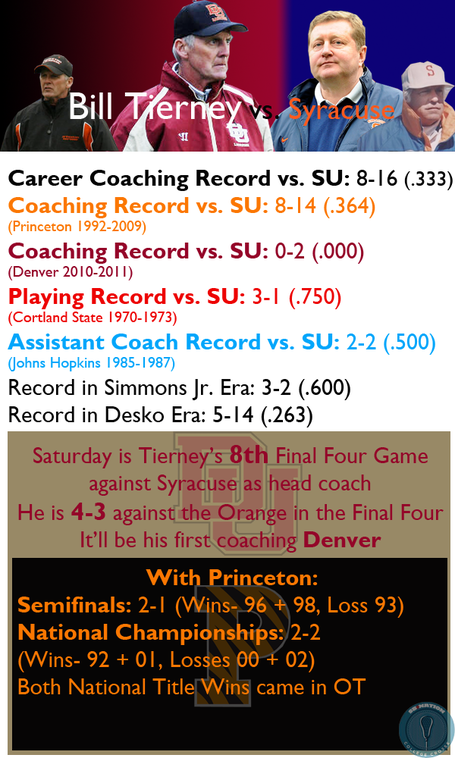 (Click to make it larger than those coaches' death stares.)

Stay tuned later in the week here at College Crosse as we also have a great infographical treat for the Cornell-Duke matchup in the works!