Let's take a look at other popular sports television packages and pretend they apply to your favorite spring sport.

Share All sharing options for: College Lacrosse as Other Sports' Television Packages

There are all sorts of different television packages across the sports landscape. Even curling -- curling! -- gets oppressive coverage in this day and age. While college lacrosse isn't fully there yet, it's good to dream, right? Well, it better be good, because we're taking all of your favorite established live sporting event programs and applying them to lacrosse. You might even say some of these programs are better because we fixed them with college lacrosse. Let's light this candle:

It's not your usual night for lacrosse, but you're ready to get a jumpstart on your college lacrosse weekend. You flip over and all of a sudden Cee Lo Green appears.

Okay, Cee Lo Green's gonna sing "Blitzkrieg Bop" for us. I mean that's not in his usual arsenal but . . .

And then you watch Providence play Marist.

Sure, you already love lacrosse's game coverage and appreciate the great announcing and production values. But you're really here for the postgame show with all the colorful personalities. Now, if we were to assume Charles Barkley is in his "Inside the NBA" mode and not "CBS and Turner's NCAA Tournament coverage" mode, he can have an absolute field day telling everyone how terrible they are. He'll go on and on about how North Carolina's not living up to the hype in his eyes one second, then be stuck on some photoshop job of him being a Virgina cheerleader nailed by an errant shot the next. Shaq's there because reasons, but hey, chemistry and some pretty good lacrosse talk!

Aside from having big time rivalries mixed in with "these two teams kind of have a history or are in the same division so... roll with it," this one requires only simple math. 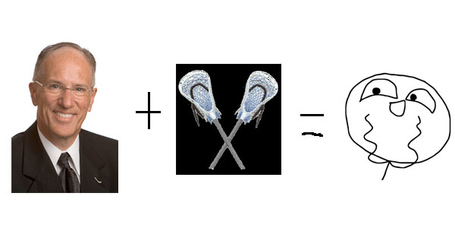 We can only imagine that this becomes an actual exchange:

MJ: And the Hoyas win the faceoff for the first possession of the ga...

DW: LOOK AT OL' JUNEBUG GO RIGHT OFF THE BAT I TELL YOU WHAT THAT 88 IS GONNA BE A FORCE TO RECKON WITH

LM: YEAH BUT YOU CAN NEVER COUNT OUT OL' FIVE-TIME JIMMIE JOHNSON HE MIGHT BE STARTING IN THE BACK BUT HE'LL BE A FORCE WHEN ALL IS SAID AND DONE

/fast forward to the fourth quarter

DW: OH MAN I THINK SOMETHING'S WRONG WITH JUNIOR HE'S REALLY FALLING BACK I THINK HE'S GOT SOMETHING WRONG WITH THE MOTOR

LM: WELL DON'T LOOK NOW BECAUSE HERE COMES THE CLOSER KEVIN HARVICK AND ONCE AGAIN WHERE DID HE COME FROM?!?!?!

DW: WELL OL' HARV LOOKS GOOD NOW BUT I DON'T THINK HE CAN CATCH JIMMIE CHAD KNAUS JUST HELPED HIS DRIVER ADAPT TO ALL THE CHANGES ALL DAY LONG AND IT'S GONNA BE ANOTHER WIN FOR THAT 48 TEAM AND HENDRICK MOTORSPORTS. GOTTA THINK JUNIOR'S GONNA BREAK THROUGH SOON ENOUGH THE WAY HIS TEAMMATES HAVE JUST BEEN DOMINATING, MAN!

Not to be confused with their Fox counterparts, Rusty Wallace and Brad Daugherty will tell you how impressed they are with every single player in Division I lacrosse.

Hey, there's an awesome Yale-Princeton game to watch this Saturday afternoon! And it's on national television! Then you realize that the contract has this "Game of the Week" format that's all regionalized. You live in the 85 percent of the country that's getting Maryland-North Carolina, but you're an Ivy League aficionado. But that's okay, you've got the NCAA lacrosse online package that let's you access any game from anywhere on your laptop. Oh, crap, that's right: This "Game of the Week" blacks out the game not in your market. Now you're scrambling to find some illegal online stream from a shady European website that has a grainy picture. So it goes. As a bonus, Tim McCarver will tell you that scoring goals is good and you want to score more than the other team.

This would make the most sense for lacrosse, and man would it be awesome. Just imagine being a student and knowing your school is going to be hosting College Gameday for lacrosse! Mascot heads, celebrity guests, colored highlighters, and all the rest! Let's just take a gander at the schedule:

Week 13: Princeton/Cornell depending on who's hosting the game or Syracuse

Whip around coverage of sports is all the rage these days, especially with the craze that NFL RedZone created. And trust me, it's the best $6.95 extra a month you can fork over to your cable or satellite or fiber optic provider. But just imagine how nuts this would be for lacrosse. Scott Hanson greets you for seven hours of commercial-free lacrosse and you're all set. You're damn right you better be set, because unlike football's whip around coverage, this is going to go around in breakneck speed as it changes to every man-up situation in the country as well as key offensive possessions. Your head will spin and Hanson will have the time of his life and that Chevy Silverado randomly doing donuts on top of a canyon in the background will burst into flames.

Once again, this requires only simple math. 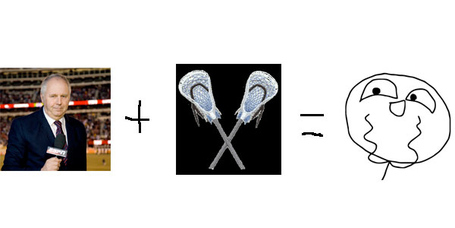 Lastly, we take a look at the venerable Monday Night Football. Mike Tirico has quite a lot of lacrosse experience from his days at Syracuse as well as lending a hand in different lacrosse projects, including a documentary this past spring. That's a big bonus here. Then we get Jon Gruden and . . .

OH HO HO I'LL TELL YOU WHAT THIS BRENDAN FOWLER KID, I CALL HIM THE HUNGRY MAN BECAUSE HE JUST SCOOPS UP AND EATS FACEOFFS LIKE IT'S BREAKFAST

THESE THOMPSON BROTHERS ARE WHAT I CALL TRIPLE TROUBLE. THREE OF THEM OUT THERE AT ONE TIME AND YOU DON'T KNOW WHICH ONE'S GONNA STRIKE AT ANY MOMENT

TOM SCHREIBER IS LIKE A MODERN DAY JACK THE RIPPER, HE'S JUST GOING OUT THERE AND RIPPING NETS APART LEFT AND RIGHT

THIS BILL TIERNEY GUY IS LIKE EISENHOWER FINDING THE FOUNTAIN OF YOUTH, STILL GOING AFTER ALL THESE YEARS BUT ALWAYS LEADING HIS GUYS TO VICTORY