Fun with Infographs: Just How Absurd is the New ACC with Notre Dame?

Share All sharing options for: Fun with Infographs: Just How Absurd is the New ACC with Notre Dame?

If you haven't been living under a rock these past 24 hours, you know Notre Dame is joining the ACC in everything but football (because ND likes doing its own thing (its own thing being getting cash money from NBC) and ice hockey (because HOCKEY EAST DOMINATION . . . and nobody in the Mid-Atlantic plays hockey and Syracuse will forever be in "they should have hockey but they don't" mode and Pitt just has Sidney Crosby wave hello).

You've also probably heard that ACC Lacrosse is going to become probably the biggest juggernaut of an athletic conference in all of college sports (sorry Ivy League debate team league). However, you need some visual evidence to confirm that this is by far the most insane conference ever put together. Well, are you ready to get your mind completely blown? Please hide your Cornell/Loyola/Denver/Hofstra fan child, they might cry after seeing this. 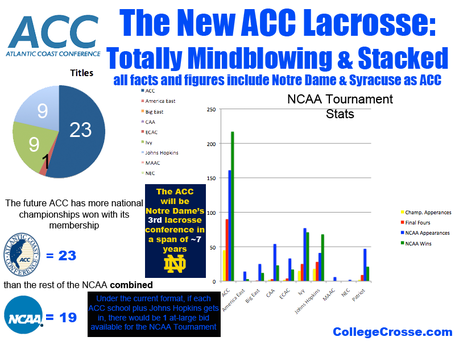 (Click to see it as clearly as the rain being gone.)

Sure, the national title numbers don't change with Notre Dame's inclusion, but the real tell-tale sign is that graph on the right. That graph has the vital signs of NCAA Tournament appearances. The ACC is on a different stratosphere now in those categories.

Also, the NCAA may need to take action with how the NCAA Tournament is set up now. Due to the insane strength of schedule that will come with the Irish's participation in the ACC, it's highly unlikely a team in the ACC that goes at least .500 misses the tournament (as is the case now). And if Johns Hopkins continues its streak, it puts everyone else kind of in a rock/hard place situation. This could mean adding some play-in games or first round byes for the top seeds, but it's up to the NCAA to decide that. Besides, this could all be a non-starter if an ACC school ends up being on the bubble (for instance, if Syracuse does what they just did this past season without the luxury of an auto-bid). I'll have a little opinion column on that in the coming days.

As for now, just stare in awe and wonder at how much face-shattering action that's coming up ahead in the new ACC.