Mayhem Addresses this Past Weekend in College Lacrosse

Share All sharing options for: Mayhem Addresses this Past Weekend in College Lacrosse 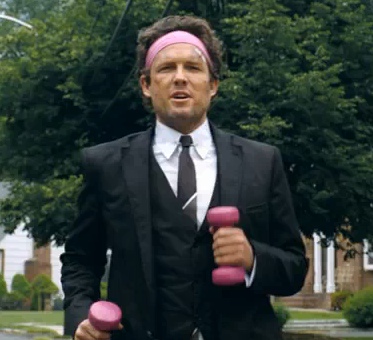 I'm Mayhem. You might have remembered me from things like streaking at State's homecoming game, getting lost for Tech, or causing your satellite to fall from your roof onto your car. Well, I saw that you had a good sense of what direction the college lacrosse season was going. Yeah? Well. . . .

You know that ACC Tournament? It was hosted by the University of Virginia. Usually UVA's really good at their own field. Might as well kick off the weekend by, you know, having them lose their third-straight game there. You had them as an easy one-seed a few weeks ago, now try predicting the bracket with that one.

Then, "How about Johns Hopkins?" you may ask. Game at Navy, piece of cake, right? Hah! I'll just, you know, make them only score twice and make their RPI drop like an absolute rock. Hope you didn't fill out your deposit for a first-round game at Homewood yet!

You want your number-one and number-two teams to be household names? Well, I'm Mayhem, you know I don't want any of that; I want this season to be as crazy as possible. Let's just have Loyola and UMass never stop winning games. Oh yeah, Hopkins: You get that Loyola team next week. I might have to pull off a few wrinkles for that one.

Oh, so Syracuse should have a nice bounce back game against Georgetown, right? Nah, that's just not how I work. How about I give the Hoyas a random win that does them no good for getting into the Big East Tournament while hurting the Orange's postseason chances? That's way more like it.

OK, so all you Central New Yorkers are thinking of switching to the Cornell bandwagon right about now. Hah, I'll just make it pour in Ithaca and make Brown have the game of their lives and pull off the major upset. Sure, I made Rob Pannell announce he's returning just so I can throw that little curveball by you guys.

And all you bracketologists out there, sure I'll give Lehigh and Colgate their wins, but you know how you had Denver as one of your last few teams in the tournament? Yeah, I'll have Fairfield force them to win the ECAC in order for Bill Tierney to work his magic in the tournament. Oh, and you all had Princeton as one of the first teams out? I'll just have them lead the Ivy League out of nowhere.

If you think my work here's done, you don't know Mayhem. There's still two weeks and the whole month of May to go. And hey, when it comes to college lacrosse, there's no stopping Mayhem like me!