Before we begin, some music to set the tone

Now onto the good stuff. Much is ado about the NCAA Lacrosse Tournament bubble as it's the time of the year to make bracketology columns and cause panic in the cities of Denver, Colorado and Syracuse, New York and the villages of Princeton, New Jersey and Villanova, Pennsylvania (and usually Hempstead, New York but not this year). In this infographic, I'm expecting whoever's in the top 9 to be locked into the tournament. Everyone from 10th-18th in the media poll qualifies as the bubble at this point, with Lehigh on it at this point as they are currently 2nd in the Patriot League. I'm using RPI stats (sorry Glaude) for each team's key victory stats. T5 means 1-5, T10 means 6-10, and T20 means 11-20 in terms of RPI rankings. This weekend's opponent is listed inside the bubble, with team names that are underlined being opponents ranked top 20 in RPI. 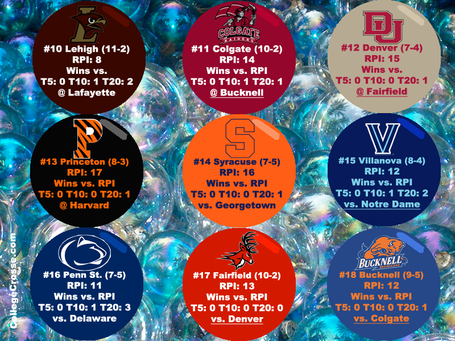 More analysis after the jump.

-As you can see, there's a lot of action within the bubble this weekend. Denver-Fairfield and Colgate-Bucknell are your must-watch games in terms of looking out for the bubble. A loss for these teams can greatly hurt their chances for an at-large, while a win would be very helpful.

-Speaking of huge games, Villanova can play themselves off the bubble (perhaps barring a loss to Syracuse in the Big East Tournament) with a win over Notre Dame Saturday evening. Notre Dame is currently ranked #6 in RPI, which means a win would give the Wildcats 2 victories over the top 10 in RPI overall as well as 2 in the 11-20 range. Given the rest of the bubble's remaining games, that could give 'Nova the edge when all is said and done on Selection Sunday.

-Notice all the Big East and Ivy League blue-bloods on the bubble? Chalk that up as a victory for the mid-majors. UMass (who did make the Final Four in 2006 but are still outside the Power 3 conferences [ACC, BE, Ivy] plus Hopkins) and Loyola (who also has historic success but the same logic applies) are locks while Lehigh should be safe assuming they take care of business. As a result of there being less at-large bids to play with, teams like Princeton and Syracuse are sweating things out this season. I can't even remember the last time both of them missed the tournament, but if Princeton can't take down Cornell and Syracuse continues their struggles this season against Notre Dame and in the Big East Semifinals, that could very well happen. Granted, both of them will benefit from teams playing one another ahead of them, but the possibility is still very much in play.

-Speaking of sweating things out, just imagine how much different things would be for Denver had they grabbed a signature win. The upset loss against Ohio State earlier in the season didn't help their cause, and let's not forget the heartbreaking loss they had against Notre Dame in triple overtime. They've also lost to Cornell and Loyola. Like Princeton, however, having close losses against good teams isn't going to give you the boost that a win would. As a result, many projections I've seen have them as a last team in.

So... what's your two cents on who's in and who's out? Either way, the next three weeks will be very interesting to watch to say the least.