Share All sharing options for: Fun With Infographs: The Johns Hopkins-Maryland Rivalry

This is the season premiere of my lacrosse infographics. Over the next couple of weeks you'll see some for the conference tournaments, NCAA Tournament, and some other rivalry games up ahead. Tonight's will focus on college lacrosse's most historic rivalry -- Johns Hopkins vs. Maryland, who will renew their rivalry Saturday night at Homewood Field. 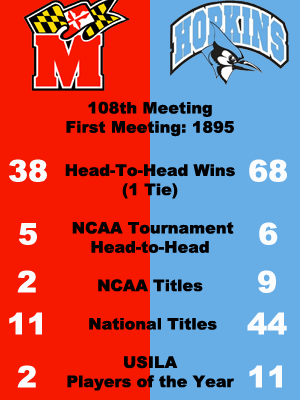 Some notes on this:

If anything needs to be corrected here, feel free to drop a line as the info I found seemed to be aggregated on Wikipedia, plus I was doing some math in my head, so there might be a thing or two that needs to be adjusted. Otherwise, I'm looking forward to dropping some more infographics as the road of the NCAA lacrosse season makes its descent on Boston and Memorial Day weekend!