Bill Tierney is Full of the Holiday Spirit, as is His Sweater

Share All sharing options for: Bill Tierney is Full of the Holiday Spirit, as is His Sweater

If you were to try and define Bill Tierney based solely on his sideline and practice demeanor -- tyrannical and driven to win, colored with a "unique and intense" vocabulary -- you'd probably want to shoot him out of a cannon into low (and brief) orbit. This, however, would be a gross misrepresentation of Tierney as a person; when off the field, Tierney conducts himself as an affable -- if not funny -- guy. He's intelligent, composed, and pretty much a normal human being. It's this dichotomy within that makes you half expect Tierney to make the holiday season run wind sprints to become the best iteration of "Season's Motherf------ Greetings!" ever, but you also believe that he may spend his evenings roasting chestnuts in the fireplace while listening to Burl Ives on the record player.

As it turns out, there is no internal or external disagreement when it comes to Tierney and the holidays: He's full of wassail and is spreading the cheer as many ways as possible, including with dubious fashion statements.

The above-video is a seasonal message from the athletic department of the University of Denver. A bunch of the school's coaches and administrators send their holiday wishes to -- I suppose -- the Internet in campy rhymes, but you should probably skip ahead to Tierney at the 1:00 mark and behold something I never thought I'd ever see -- Bill Tierney looking adorable in a horrendous Christmas sweater vest: 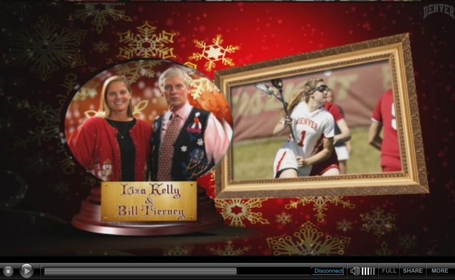