Lacrosse's version of the Heisman Trophy gets handed out tonight. Here's a graphical look at the finalists.

After a season of long lists of players being considered for the prestigious Tewaaraton Award, we've finally reached award night. The 2014 Tewaaraton Trophy will be given to the top player in both men's and women's lacrosse tonight at the Smithsonian Museum of the American Indian in Washington, D.C. The five nominees will arrive in their finest clothes, eat some fancy hors d'oeuvres, perhaps enjoy a dance number with the female nominees, and take plenty of photos for the press. But only one will leave our nation's capital with college lacrosse's top individual award.

Loyola defenseman Joe Fletcher, Princeton midfielder Tom Schreiber, Albany attackmen Lyle and Miles Thompson, and Duke attackman Jordan Wolf are all up for this year's award. Each have put a lot of work into their games and in return delivered great performances to get to the finalist stage for the honor. At the end of the night, though, one will be placed above his peers as the best player in college lacrosse and holder of the 2014 Tewaaraton Trophy. Here's a little bit of a graphical look at how the five stack up against one another: 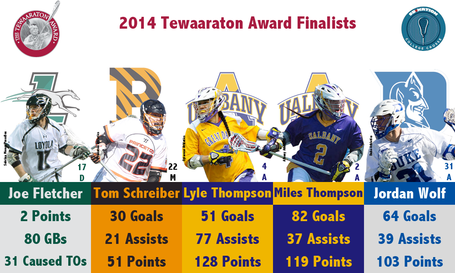