What are the bodies that are comprising the body count?

Share All sharing options for: Tracking Rambo Kill Counts: Sorting Out the Bodies

Until today, we haven't examined M. Rambo's body count to determine whether he's been (a) a damn fine Terrapin, and (b) merely an individual on a crusade without greater purpose. Sorting through the bodies, it appears as if M. Rambo -- not unlike J. Rambo -- is both serving a greater good while finding personal enlightenment through the extermination of those that stand in his path: 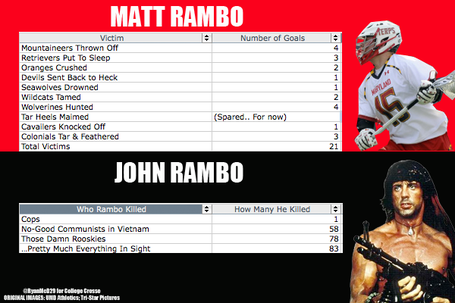 Some brief notes on this: