You sure about that? You wanna know about the MAAC? THE FACEOFF will take care of that.

Share All sharing options for: THE FACEOFF: 2014 MAAC Lacrosse Tournament

The Metro Atlantic was one funny conference this year. Siena took care of all its business, going undefeated in conference play and earning the top seed in this weekend's tournament. The rest of the MAAC? Absolute mayhem. Five of the conference's seven teams ended up at 3-3, setting up a massive tie for second place. The conference had to use a copious number of tiebreakers to sort it all out. When the dust settled, Marist, Detroit, and Canisius held the tiebreakers to get them invited to the MAAC Tournament.

This leads us to this weekend's tournament in Poughkeepsie (it's a real place and not just a funny name). The MAAC Tournament usually goes bonkers, with last year being a great example. Detroit, who finished the regular season 3-9 overall, managed to snag fourth place in the conference to qualify for the tournament. Once postseason play came, the Titans went on a tear, won the conference tournament, snagged an automatic bid to the NCAA Tournament, and then gave second seeded Notre Dame a scare in the first round of the The Big Barbeque. It's almost a certainty that the winner of the MAAC will be put into the play-in game for the NCAA Tournament, but given the conference's track record there might be a hellraiser that emerges.

THE FACEOFF continues its conference tournament series with a look at the MAAC. Here's how it shapes up: 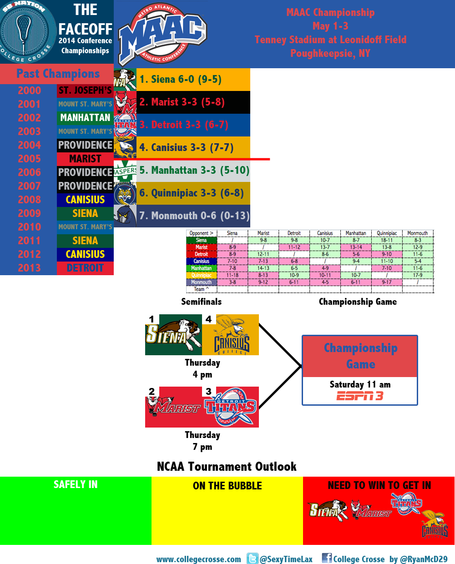