The new look Big East is all set for its conference tournament. THE FACEOFF provides a peek at it.

With the departures of Notre Dame and Syracuse and the arrival of Denver, most pundits pegged the Pioneers as their favorite in the rearranged Big East. The fact the Pios snagged the top seed in the league's tournament probably doesn't surprise many lacrosse fans. Everywhere else in the Big East? Chaos. Lots and lots of chaos.

Those same pundits are probably scratching their heads right now over St. John's, who many saw as Denver's biggest challenge, missing out on the Big East Tournament entirely. Marquette, in just their second season as a program and their first in the conference, managed to put together a 4-2 conference record and ended up second on the table. Even Rutgers, who drew some curious eyeballs with their performances in their campaign, made a splash to get themselves into the tournament. The only usual Big East Tournament suspect from the original format to make it into this shindig was Villanova, who benefited from the three-way tiebreaker with the Scarlet Knights and the Johnnies.

The entire college lacrosse world will be focusing on this tournament in the event that the Pioneers slip. If the Eagles, Wildcats, or Scarlet Knights manage to steal a bid, somebody on the NCAA bubble is going to pop (including, possibly, Denver).

You can stream the semifinals on Thursday and then catch the championship game on Fox Sports 1. As for now, you can check out the Big East's edition of THE FACEOFF right here: 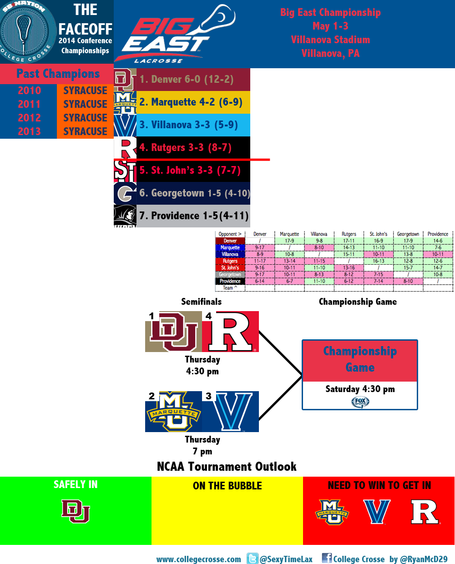 (Click to make it BIG East, if you catch our drift.)