This is your last chance to see an ECAC Lacrosse Tournament. THE FACEOFF gets you all set so you know what to expect.

Share All sharing options for: THE FACEOFF: 2014 ECAC Lacrosse Tournament

If any conference in college lacrosse was gutted by conference realignment, it was definitely the ECAC. The conference had eight teams this time last year, then all heck broke loose. Loyola moved with the rest of its athletic department to the Patriot League, Denver got an invite to the revamped Big East, and Hobart left for the NEC. That left five schools competing in the conference for 2014. However, with the announcement of the Big Ten adding lacrosse, Michigan and Ohio State were both on their way out as soon as this season was over. As a reaction to that, Fairfield put in place a move to the CAA and Bellarmine decided to join their southern friends in the SoCon (currently the A-Sun) for 2015. The word is still out on what Air Force will do, but this much is clear: this is it for the ECAC.

The conference will go out in style this weekend at THE Ohio State University's campus in Columbus. As of now Fairfield's the only school with any aspirations of an at-large bid, though that is looking bleak given the state of the current bubble. However, as the one-seed they'll be the favorite to grab the AQ and put themselves in The Big Barbeque. Host Ohio State looks to redeem what's been a disappointing regular season by grabbing their second straight conference crown, while Air Force and Michigan look to play spoiler and snatch a bid for themselves.

THE FACEOFF bids adieu to the ECAC with its conference tournament edition. Flowers and goodbye cards may be left in the comments section. We hope it doesn't end up like that scene in Snoopy Come Home where it's 3 straight minutes of the Peanuts gang crying over the departure of Snoopy. But hey, at least in that movie Snoopy comes back, so who knows, maybe the ECAC will sponsor lacrosse again in the future! Anyhoo, here's the infographic: 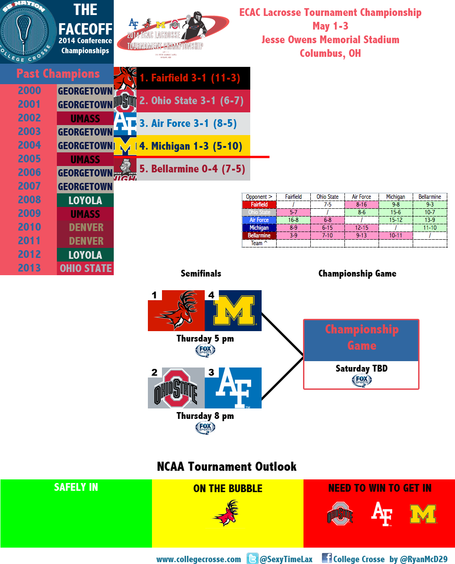