The new kids on the conference block get their special edition of THE FACEOFF.

The Atlantic Sun Tournament's an exciting time for the world of lacrosse. Not only will it be the conference's first tournament, but an auto-bid to the NCAA Tournament is up for grabs in the bunch's first year of existence. If that wasn't enough, the winner of the tournament will make their first ever appearance in The Big Barbeque. Lacrosse is spreading across the country, and a non-traditional Southern school will make its way to the NCAAs, a sure sign of the growth of the game.

Macon, Georgia is the site of the inaugural A-Sun Tournament as Mercer grabbed the rights to host the league's playoff due to its hold on the top seed. High Point, in its second year as a varsity program, will face off against Jacksonville, a program that's been around for a few years but is looking to make a big leap forward. Richmond rounds out the field. Although the Spiders' move came with controversy (Richmond sacrificed other sports to make room for lacrosse), an NCAA berth in just their first season would be quite the story.

Let's take a look at how the action shapes up this weekend: 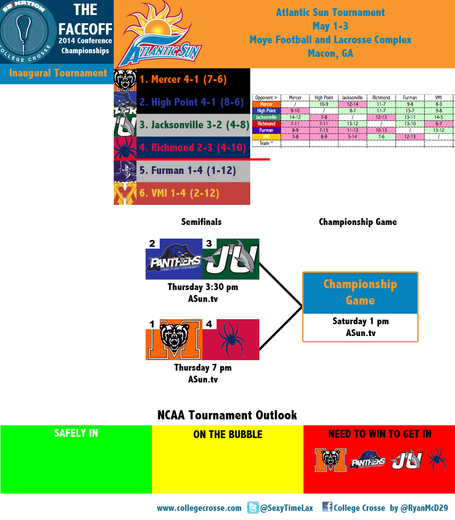