The America East Tournament gets underway later this week. THE FACEOFF gets you all set for the show.

The America East Tournament gets underway this Thursday at Stony Brook (because, as we've mentioned many times this season, the Seawolves are seemingly always at home). If you're heading into this tournament thinking that this is going to be a showcase for the Thompson Trio and the Albany Great Danes, we won't blame you for wanting to see the group do awesome lacrosse things. We're here to remind you that the Thompsons are only going to be part of the stuff to be on the lookout for in this conference tournament.

Due to Albany's struggles out of conference, an NCAA Tournament bid isn't a formality for the Danes as they'll need to win the America East to get into The Big Barbeque. An upstart Binghamton squad, who went from dead last to second in the league in just a season, is looking to make a big splash of their own. Conference mainstays UMBC and Stony Brook are also looking to put themselves back at the top of the league after the Great Danes' triumph last season. While the winner of this tournament is possibly heading to a play-in round game, the America East should have an entertaining weekend with the potential for some real twists and turns out in Suffolk County.

THE FACEOFF is here to get you all set for the action with a look at final conference standings, past champions, and some information about how each team fared against one another. You can fire up the laptop on Thursday to catch the semifinals and then wake up nice and early on Saturday to check out the championship on ESPNU. Here's a look at how things are shaping up: 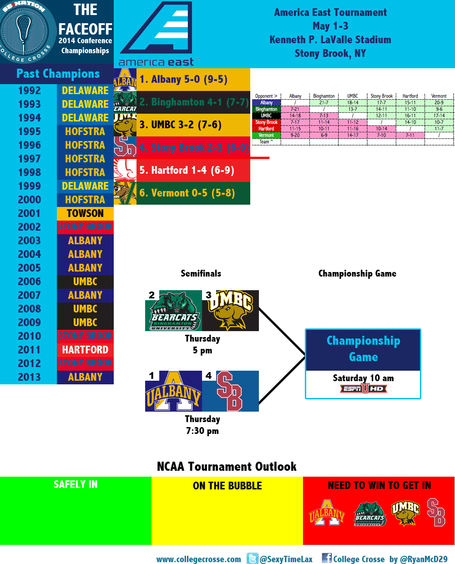