THUNDERDOME! madness in infographic form. It's the CAA Tournament edition of THE FACEOFF.

The Colonial Athletic Association is known for its chaotic conference play. Good teams can find themselves on the outside looking in, the conference tournament often features upsets galore, and the league often contributes to bid stealing that bursts bubbles. We don't call it THUNDERDOME! for nothing, folks!

Hempstead and Philadelphia is where the action goes down on Wednesday night, kickin goff the 2014 edition of the CAA Tournament. The conference champion will be crowned on Saturday at the campus of the highest remaining survivor. Hofstra has put together a nice resume, but to relieve themselves of a lot of sweating on Sunday they'll need to take care of business. That's a bit easier said and done in this neck of the woods. Drexel, Towson, and Delaware all look to steal a precious bid to the NCAA Tournament and put themselves in The Big Barbeque with a tournament victory. It's three games of chaotic lacrosse fun, and we've got a special edition of THE FACEOFF to get you all set for it: 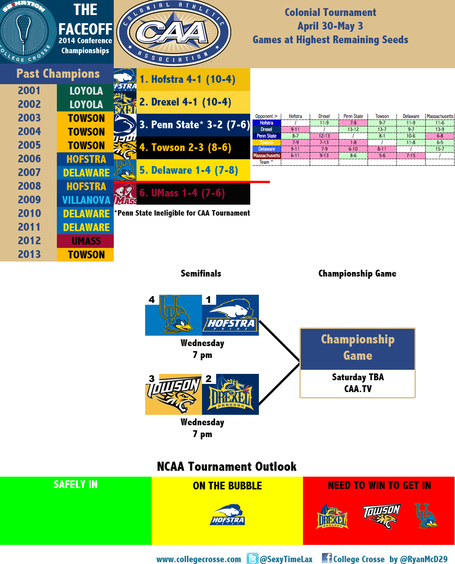