THE FACEOFF gets all fancy schmancy for the conference tournaments. First up: The Patriot League and its six-team tournament.

Conference tournaments get underway this evening with the Patriot League Tournament. With a new format thanks to teams coming in or starting up programs, the Patriot League had nine teams in the conference. As a result, the largest conference in D-1 lacrosse now has the largest conference tournament in the land. Six teams enter with the bottom four seeds squaring off in a quarterfinal round. Awaiting them at Ridley Athletic Complex on Friday are number one Loyola and number 14 Army. The Patriot League Network and CBS Sports Network are the places to be to catch all the action if you aren't heading to Baltimore to see it live.

THE FACEOFF comes in with a special conference championship edition. As you'll see over these next two weeks, there's some new goodies involved:

Without going any further, let's give you the scoop on the first -- in terms of when the tournament started -- auto-bid up for grabs for this year: 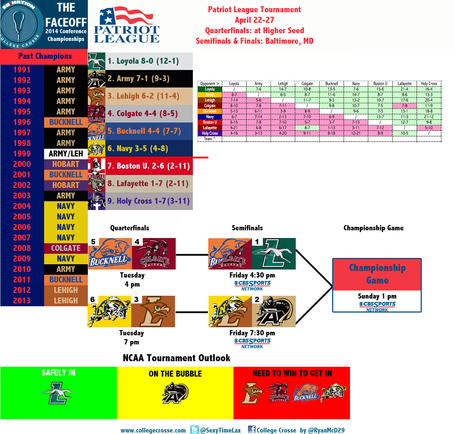