As the season gets closer and closer to The Big Barbecue, THE FACEOFF preps you for another big week ahead in lacrosse.

Share All sharing options for: THE FACEOFF: Week 9 (April 2 - April 8)

Look at that! The calendar reads April! For lacrosse fans, it means that the season's moving into high gear. The NCAA Tournament will be here before you know it. Teams are jockeying for position in their conferences, trying to maintain their rankings in the polls, and are looking for ways to get themselves off the bubble with some big wins. April's when the fun really starts to happen, and given the way this season's been going, we should be in for some wacky stuff.

This week's edition of THE FACEOFF takes a look back at another exciting week of games with a scoreboard and some graphs, plus a fresh new poll and leaderboard is included in the infographic. We've also set the table for what should be some of this week's exciting matchups. If you want lacrosse on your television, there's plenty to go around in the next seven days. As usual, don't be afraid to venture off of the list we've provided, as there are tons of other conference games this weekend with many available for streaming. Let's take a look at this week's infographic: 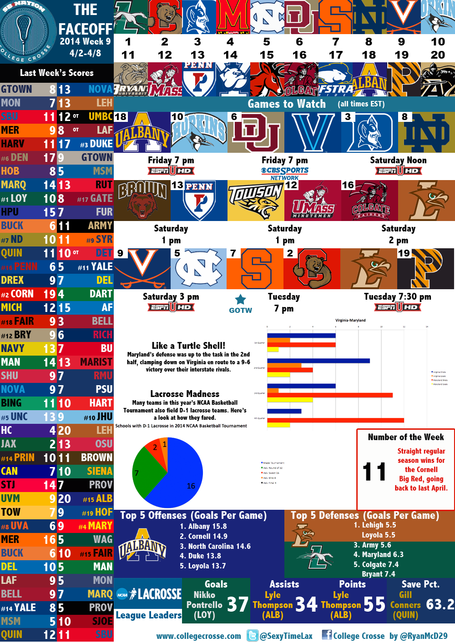