A current college coach provides some words about face-off play.

Share All sharing options for: Reader Response: "Argument Against Quint Kessenich and FOGOs"

A reader -- a current college coach -- sent along the following words that address Quint Kessenich's weekly piece for The Baltimore Sun. In the piece, Kessenich stumps for reform around face-off specialists. I don't have a dog in this fight -- my personal opinion is that face-off play is heavily overblown -- but this coach -- who asked to remain anonymous (a request that I granted unequivocally given the tension around this particular subject) -- provided a reasonable argument against Kessenich's thoughts. This coach's words are presented unedited, save for (1) revisions to punctuation, (2) the inclusion of a link to Kessenich's piece, (2) a link to LaxPower.com, and (4) an editor's note that potentially creates a greater influx of pertinent information.

I appreciate everything Quint Kessenich does to help promote the sport of lacrosse. However, there are two fundamental arguments that he makes that I think are misplaced: shot clocks and FOGOs. I will leave the shot clock argument for another time to focus on the recent trend of arguing against FOGOs and his assertion that, “no other sport has a specialist as important as a FOGO — they decide more games than kickers. That's not right. It's ironic that the least-talented player on the roster might be the most important.” (The Baltimore Sun, March 6, 2014).

One could argue that there are specialists all over sports. Do we expect Peyton Manning to play safety or Martin Brodeur to take faceoffs? No, that is not their job or what they are hired to do. Arguably, one of the best pitchers to ever walk a mound is Mariano Rivera. He averaged about one inning -- when he did get in the game -- and he didn’t even leave the clubhouse until two-thirds of the game were complete.

Quint Kessenich was a four-time all American lacrosse player and two-time C. Markland Kelly Award as the top goalkeeper in the nation with a career save percentage of 0.6289. Less than 4 of every ten shots he faced ended up in the back of his own net. That is darn good goalkeeping. I ask this though: how many goals did he have? What was his shooting percentage, caused turnovers, face-off wins or how often did he come off the wing and win a ground ball? The answer is very few times, or not at all. That was not his job or what he was recruited to do. He was expected to do one thing: keep balls out of his own net. Could he play in transition and get the ball upfield? Yes, but that is bonus lacrosse. Same goes for a short stick defensive midfielder. A coach would not expect him to score often but if he excels and playing solid defense, it is one less area the coach needs to be concerned with. He will not have to strategize around his team being weak in a given area.

Brendan Fowler played football and is a freak athlete; he walked on to one of the most successful teams in the sport and won the M.O.P. in the National Championship game playing for Duke in 2013. It was one of the most dominating faceoff performances in a long while, yet Syracuse was in that game for large portion of it. Duke won because they were able to control the ball and maintain possession for a chunk of that game. The face-off X is probably where Syracuse lost that game.

Over longer periods of time, statistics seem to indicate that face-off win percentage is not a direct contributor to success, but not winning face-offs will lose you games. Only twice in the past decade has a national championship team won less than 50% of their face offs (thank you Paul Carcaterra for that nugget). Laxpower.com ran the numbers on face-off win percentages against win/loss percentage and a neat thing pops up: Winning faceoffs does not necessarily win you games, but losing them can cost you: 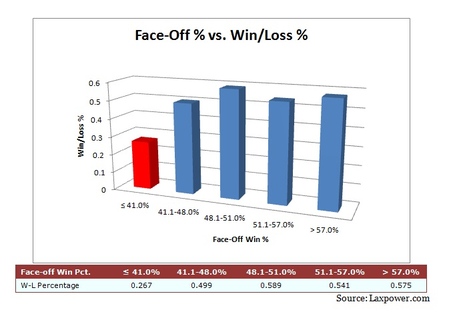 What this chart shows is that over time, if you win at least 41% of your face-offs, you have at least a 50/50 shot to win your game. While I would like to see the breakdown for 60-70% and 70% and above to see if that has more effect, it is clear here that winning 57% or more face-offs only gets you, on average, one more win in 10 per year. [Ed. Note: Brian Coughlin of Inside Lacrosse actually published some information on this recently.] I would argue that for many, that one win is crucial and the difference between a playoff game and going home.

The other interesting note is the falloff to how much losing face-offs cost you. Giving up more than 6 of 10 face-offs suggests a drastic reduction in winning games. A team suddenly goes from the odds of a coin-toss to losing over seventy-five percent of your games.

Face-offs require a specialized skill set. Just like saving goals, playing one-on-one defense, or shooting in tight spaces. There are very few team sports that ask all players to excel at all positions, lacrosse should not be either. One can crow that “it’s not fair” that FOGOs are so good at what they do. Last time I checked, we keep score in lacrosse. There is a winner and a loser of every game. It’s not supposed to be fair. We play and coach the game to see who the best at it is. Athletics are designed to be inherently unfair: it is how we figure out the best player, the best coach, and the best team.

As Syracuse and some other teams are learning early this season, not having a strong face-off presence is more costly than having one is a value-add. If I had one or two players who did nothing other than win face-offs 60, 70, or more percent of the time I wouldn’t care that he could not do anything else: If he costs me three goals a game but gets me seven, I win the game every time and that is the only statistic that matters in a game.