Some guy from Baltimore has feelings about this year's bracket.

"I've never even heard of most of these teams. Hell, picking this bracket is going to be easy: Only 14 of the 64 teams play Division I lacrosse; that means that only 14 schools could possibly advance out of the first round as, everyone knows, if you don't have a lacrosse team, your face is garbage. Yeah, yeah, yeah. I know that not every first round game involves a school with a lacrosse team and that you're thinking that somebody has to win those games and advance. Well, let me tell you something: This is going to be the first year ever that there won't be winners in the first round. It's true! The bracket is just going to have a hole. In fact, the entire West region of this piece of garbage -- featuring no Division I lacrosse teams -- is canceled. I saw it on Huffington Post."

"But this isn't totally cake. The stupid NCAA made two lacrosse schools play each other in the first round. I have so many emotions. Providence-UNC and Duke-Mercer. Duke probably kicks Mercer out of the building because the power of Dino's zen isn't limited to lacrosse and Durham and the Final Four. That's in Baltimore this year, baby! Hopkins is going to hire him and we're going to win 16 national lacrosse championships in 2015 with Dino at the helm! Anyway, so Duke beats Mercer and then I don't know about North Carolina and Providence. I've never been to Rhode Island and don't think it actually exists -- who likes clams over crabs?! dopes! -- so I'm going Tar Heels even though they never win in the spring like Hopkins, baby! 7,251 national championships, baby!"

"So, I'm picking between Albany, Ohio State, Syracuse, Virginia, Harvard, North Carolina, St. Joseph's, Villanova, UMass, Duke, Manhattan, and Michigan. Syracuse and the Buckeyes probably meet in the second round in Buffalo -- two lacrosse schools playing each other in a town with only one lacrosse school (Canisius) -- and I'm taking Ohio State. Easy pick: Screw Syracuse -- 1990 never existed! -- and Jamison Koesterer -- my boy! -- coaches at Ohio State. No chance for the fruit. Ohio State probably meets Albany in the regional final in that South region and I'm going Ohio State because you gotta stick with your Big Ten buddies, right? Ohio State to the Final Four (unlike those cheaters at Syracuse)."

"That East region is a pain in the ass. Virginia, Harvard, North Carolina, St. Joseph's, and Villanova are all in that part of the bracket. Villanova gets past St. Joseph's in the Round of 32 because reasons. I say that Virginia beats Harvard in the Sweet Sixteen because the Ivy League is o-ver-rated and North Carolina beats Villanova because they wear baby blue like Hop. That leaves Virginia and UNC in the regional final. Give me Virginia to the Final Four because they're going to eventually be in the Big Ten with Hopkins."

"Over in the Midwest region -- Hopkins' new home! -- Duke beats Massachusetts in the second round, slips past UMass in the Sweet Sixteen, and crushes Manhattan in the regional final. Northern lacrosse ain't got nothing; o-ver-rated."

"So, my Final Four: Duke, Virginia, Ohio State, and no team from the West region because it was canceled. A couple of blue bloods and a Big Ten team, just like what will happen from now on. I got Virginia over Ohio State in the semifinals -- probably on the back of a bunch of guys from the MIAA -- and Duke goes into the national title game due to the forfeit from the West region (I told you they don't play nobody!). I'm taking Duke over Virginia in the final, where the Devils will advance to the Super Secret Ultimate Final: A basketball game played at Homewood where they'll lose to Hopkins." 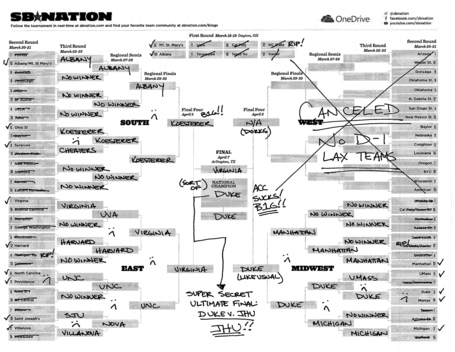