Tracking Rambo Kill Counts: There are no Friendly Civilians!

Share All sharing options for: Tracking Rambo Kill Counts: There are no Friendly Civilians!

M. Rambo continued his unfettered campaign of destruction this past weekend, accumulating two kills against guerrillas known as "The Wildcats": 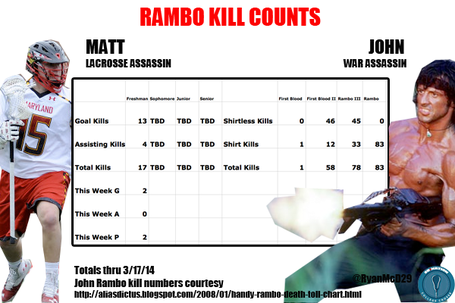 M. Rambo, though, hasn't eliminated mercenaries in quiet solitude this season, though. Unlike J. Rambo -- a man that generally used stealth to his advantage -- M. Rambo has done his slaughtering with spotlights directed at him. In fact, there are only a few other mercenaries in the wild that have had as many civilians witness his reckless massacring:

That chart -- limited to theaters of assault ranked in the top five of accumulated and average number of civilians observing brutal acts of man while avoiding collateral damage -- indicates something important: M. Rambo's ruthless behavior is as notable as that of J. Rambo's exploits in one of his more important documentaries -- Rambo:

This is haunting stuff, people.