College Crosse made a trip to New Jersey for Carolina-Princeton last week. Ryan shares his experiences in a diary.

Share All sharing options for: North Carolina-Princeton: A Diary

That was my reaction at the end of Friday evening's battle between the North Carolina Tar Heels and the Princeton Tigers. Yes, it was an attempt to mimic Doc Emrick's commentation as to how wonderful a sport can be, but the game ended up being a microcosm of what lacrosse's purpose: Teams going back and forth on scoring runs, stretches of great defense, and terrific individual performances, all on display at Class of 1952 Stadium. Having an up-close view of the action made me that more appreciative of what I saw.

If you read my entries last season, you know I enjoy talking about the process of getting to the game as part of the gameday experience. Friday was an ambitious use of public transportation for me. I traveled from Long Island, so my trip to Princeton was first aboard the Long Island Rail Road, followed by the NJ Transit Northeast Corridor line, and wrapped up on the Dinky Shuttle. I'll list off some of the highlights of this nearly two-hour (counting a Penn Station layover) voyage:

As for the commute back, I stayed with some friends in Edison a bit, so I was leaving New Jersey at a late hour. Due to Amtrak construction, the NJ Transit train was running about 10 MPH in some spots. This was followed by having to take one of the infamous LIRR "drunk trains," featuring the entire Island's 20-something crowd fleeing the city on one train because it's the only train for an hour. Mercifully, things got much quieter after transferring trains at Jamaica. 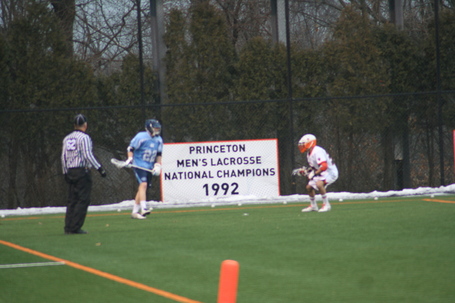 Last season at Chapel Hill, North Carolina and Princeton lit the scoreboard on fire. The expectation heading into this one was for things to be about the same, but the game also featured the narrative of two teams needing a bounce-back win: In their previous games, the 'Heels lost a close one to Notre Dame while the Tigers were outplayed by Johns Hopkins.

The game began with a flurry of goals. UNC held a 4-1 lead at the first media timeout; tt was looking like last year's iteration of the matchup was going to happen again. A funny thing happened, though: things got (a little) defensive. Princeton held North Carolina without a goal for over a quarter of play, propelling the Tigers to a 5-4 lead midway through the second quarter. After UNC tied the game up, another five minutes would tick away anyone else scored. Signs that these two teams maintain a ton of offensive firepower came back, however, as Princeton and Carolina traded goals in the final ten seconds of the half, including a highlight reel goal by UNC face-off specilaist Stephen Kelly. We went into the intermission tied at six. 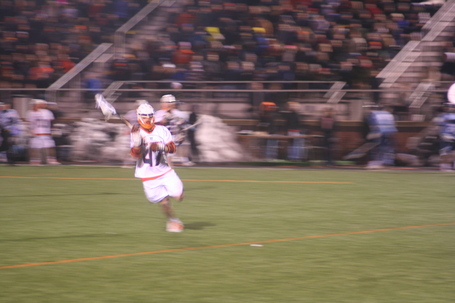 The second half started with a few goals for both teams, but again settled into a (kind of, sort of) defensive battle with both defenses showing feats of strength. UNC would register their 10th tally with just under four minutes to go in the third period and looked poised to take control of the game. Shortly thereafter, the Tigers' offensive power emerged in full force with three quick goals to deadlock the scoreboard the end of the quarter, netting the go-ahed goal a minute into the fourth (thanks to Tom Schreiber). It would be Princeton's second lead that evening.

The rest of the affair would revert to a defensive-like product (not concentrated defense, but processed defense), featuring only three goals scored over the balance of regulation. All three of those markers were Carolina-born, including the go-ahead goal from Chade Tutton with 3:50 left on the clock. Although Princeton goalie Matt O'Connor wielded a hammer at times, it was his counterpart -- Kieran Burke -- that came up with the biggest stop of the night shortly after the Heels took the lead. That save created a long possession for the Tar Heels, an opportunity that ended with a Jimmy Bitter goal inuring from a delayed penalty situation in the final minute. UNC held on and came away with a 13-11 victory. 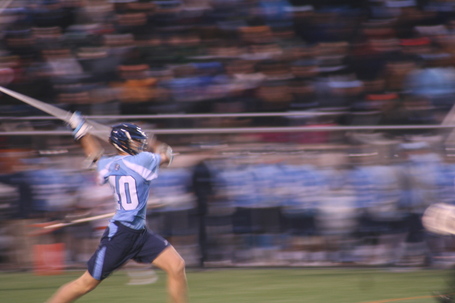 UNC has been toward the top of the leaderboard this season in both goals-for and goals-allowed; that balance helped the 'Heels hang on to the win with a key defensive stop right after their offense gave them a late lead. Bitter had another impressive game, tallying two goals and two assists. Tutton and Pat Foster also added three goals each to help UNC's cause.

It looks like the Tigers are close to really clicking. The combination of Schreiber and Mike MacDonald was deadly once again, as Schreiber -- the Tewaaraton's top midfield candidate -- generated three goals and three assists while MacDonald added a goal and four helpers of his own. The Tigers still have significant room for improvement, especially in solidifying their defense, limiting turnovers, and successfully clearing. The Tigers' effort, however, was marked improvement over the team's loss to Johns Hopkins, and the breakout 12-save performance from O'Connor might help put an end to the Tigers' goalie questions.

This game set up a critical conference stretch for both teams. UNC will face the extremely strong ACC throughout the season; the Tar Heels are currently 0-1 in the conference, but a win this weekend against Duke (who has had two tough losses recently) could help build on confidence the team gained Friday night. Princeton will start Ivy League play against Pennsylvania on Saturday, the onset to what is shaping up to be a very tough conference slate for the Tigers. Although the Tigers are now sitting at 2-2 overall, the bright spots that started to appear against the 'Heels can go a long way in helping Princeton string together some wins.

In the end, though, it was an entertaining lacrosse game. Both teams came to play and matched each other stride-for-stride on each side of the ball. It may not have entirely met its pregame hype as a furious shootout (it certainly did in spurts), but it did end up being highly competitive. Under the lights and a natiionally-televised microscope, both Carolina and Princeton put on a show that lacrosse fans love to see. 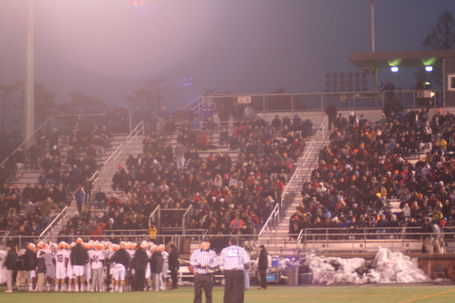 The atmosphere on a chilly evening in Princeton was an electric one, as both team's faithful helped jam the stands at Class of 1952 Stadium. On the field you could hear the roar of the crowd whenever a goal or a big save was made by one of the two sides. Maybe it was because I was facing the stands rather sitting among the crowd (my usual position), but it definitely seemed to be one of the louder games that I had attended. Credit goes to the Princeton University student body, who came out in decent numbers even with the cold. The only thing missing was the pep band doing their usual playlist of punk classics during the breaks in action, which is frankly the only disappointment I had with the atmosphere.

If you ever come out to the stadium we refer to as "Class of 1952 Campground," you won't be disappointed. It's the standard bleacher fare for seating, but the sightlines are good and so's the surrounding area. On one side of the field you get a nice view of campus, while the opposite side has a woodsy area that will look better once the spring arrives. The field turf that was installed last season also improved the ambiance of the stadium.

Of course, a stroll around the Princeton campus is also a must-do when coming to a game here. Although there are modern aspects to it, the highlight of the campus is all the old buildings on the grounds. After that you'll want to hit up Nassau Street, which helps define Princeton as a true college town instead of a run-of-the-mill Central Jersey suburb. When you hit the part of the street that marks the end of campus, be sure to wander into Hoagie Haven for a meal. It's my gameday tradition whenever I'm in town, but you'll enjoy it as well.

THE PART WHERE PRINCETON FANS WILL WANT TO KILL ME 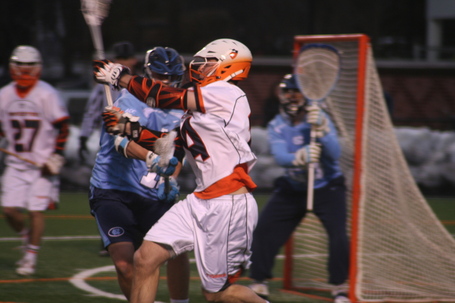 I've been going to Princeton games for a few years now. However, the Tigers are now 2-6 when I attend Princeton games, including losses in the last five I've been to (most of these were against Syracuse, which has a four-game winning streak against Princeton). Additionally, two of those losses were season-ending defeats at the 2009 NCAA Tournament Quarterfinals and the 2013 Ivy League Championship.

Princeton's battle with Cornell in 2014 is at Bethpage High School on Long Island. I plan on going to that game. If you are a Princeton fan and see me in the parking lot, you may want to form a human barrier around me for the sake of superstition. (On second thought, now that I mentioned this factoid, things will turn around. Or they won't, because that would make this diary a pretty boring one.)