THE FACEOFF is revamped and ready to go for 2014.

Share All sharing options for: THE FACEOFF: Week 1 (February 5 - February 11)

The dead of winter is basically suffocating the entire country. Alas, hope comes in the form of a SPRING SPORT that refuses to let cold weather and snow ruin its entrance. The huddled masses look up and see this beacon of faith, and together they sing:

It's time to begin, isn't it?
I get a little bit bigger but then I'll admit
I'm just the same as I was
Now don't you understand
That I'm never changing who I am

Okay, before the Internet comes knocking at my door looking to publicly execute me, I wasn't being that serious. A new season of college lacrosse has arrived, and that means the return of our weekly infographic series -- THE FACEOFF. If you're new here, each week we'll give you a pretty picture of the week's media poll, games to watch, and some stats and graphs to throw around.

For veteran fans of the series, however, you might notice some changes, such as:

With the ground rules out of the way, let's check out the first edition of THE FACEOFF for 2014: 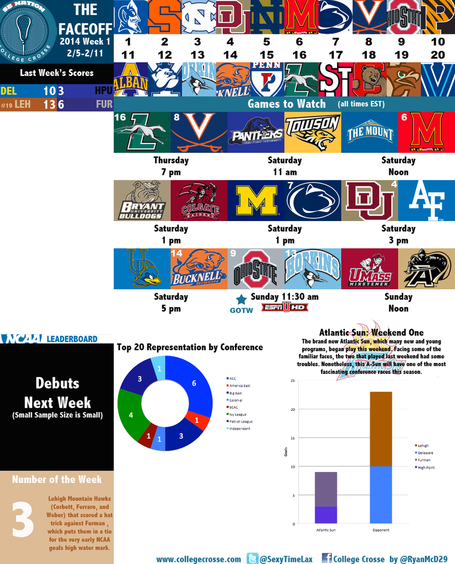 (Click to make it bigger than your anticipation for the season.)

Although college lacrosse has a bit of an unorganized start to the season, there's a lot of teams taking the field this upcoming week. We'll be here all season to break it down and to talk about it, so stick to College Crosse for all the information and goodies you need to get through the spring. Opening face-offs are upon us, and THE FACEOFF is just as happy to have lacrosse back as you are!