M. Rambo was back in action this past weekend against Syracuse. What was his death rate?

Despite Maryland's carpet-bombing of Syracuse this past weekend in the Carrier Dome, M. Rambo didn't engage in the type of wanton destruction that made J. Rambo the world's greatest body-flattening problem-solver. Now, this isn't to say that M. Rambo built a shabby shelter and rested in the jungle. Rather, M. Rambo didn't set off a keg of explosives in Central New York like J. Rambo would have. 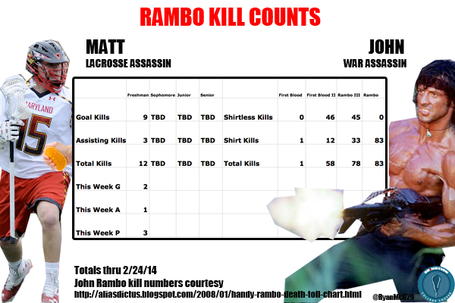 (Click to have your armed burned off by a flamethower.)

I am, however, worried about M. Rambo's ability to wreak havoc in Division I without mitigation. As discovered this weekend, M. Rambo isn't the only hyper-aggressive assassin playing at college lacrosse's highest level. No, M. Rambo is being stalked by Dan Bloodgood, sociopathic guerilla somewhat affiliated with Monmouth. Bloodgood registered four kills in his first pursuit of M. Rambo, presumably to butcher him.

Division I lacrosse is officially deadlier than it has ever been in its history.