A huge early weekend of lacrosse looms. This week's edition of THE FACEOFF gets you ready.

Congratulations! You've made it past the first sort of full week of college lacrosse! To say last week started the season off with a bang is an understatement. Frantic comebacks, thrilling conclusions, and breathless overtimes dotted the lacrosse landscape.

If you're anywhere in the Eastern half of the United States, you're probably thinking more about another snowstorm heading your way than the rite of spring that's underway. Have no fear, though: THE FACEOFF is here to remind you that there's a lot of great lacrosse heading your way.

This week we've got a lot of top 20 battles and games to stream on your computer or watch on your television. As a result, this week's "Games to Watch" are chock full of action that will make you want to be snowed in for the whole weekend (or, if you're close to the action, will make you want to constantly badger your local municipalities to get roads plowed so you can get to the stadium). Apologies to Wagner and Lafayette: We were close to putting you on the list due to gigantic Reverse Survivor implications, but I think you'd even like the matchups we picked. As usual, just because we only put a number of games on the infographic doesn't mean there's lots of other great games to watch as well.

We've also got a neat scoreboard of all of last week's games, some fun graphs and factoids, and an early look at who's leading some key statistical categories. Got all that? Good, because here we go: 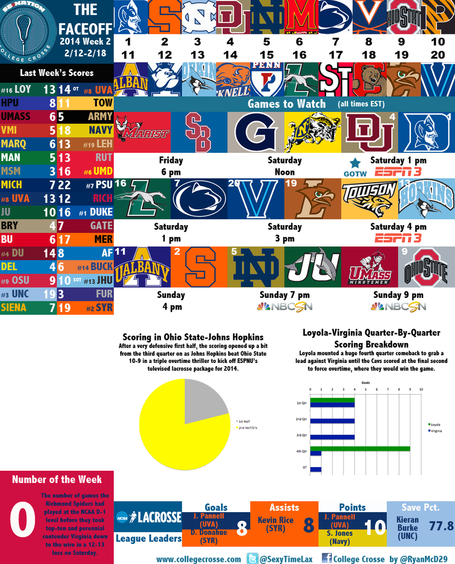 (Click to make it almost as large as the snow you're probably going to have to shovel.)