The bloody details are bloody.

Matt Rambo made his debut for Maryland this past weekend against Mount St. Mary's. It's hard to argue that the highly-touted recruit -- Inside Lacrosse ranked Rambo as the second-best prospect in the class of 2013, slotting him behind only Syracuse's Jordan Evans -- had himself a day, putting four goals on the board and assisting on two other tallies. The freshman attackman was deadly, showing his ability as an offensive centerpiece capable of targeted violence and vengeance.

But just how destructive was Rambo against the Mountaineers? To make that determination, there's only one analogue eligible for comparison: John Rambo, a man that makes his own rules and uses extreme measures to solve any problem. John -- not related to Matt (as far as we know) -- was the central figure in four of the most important documentaries ever filmed: First Blood, Rambo: First Blood Part II, Rambo III, and Rambo. These documentaries illustrate John's slaughtering style, one that Matt seemingly emulates. John's body count is the gold standard in reckless force, and whether Matt can exceed John's kill rate is a major factor in determining the savageness of the attackman's production.

So, how is Matt stacking up against John after one game? This graphic tells the story: 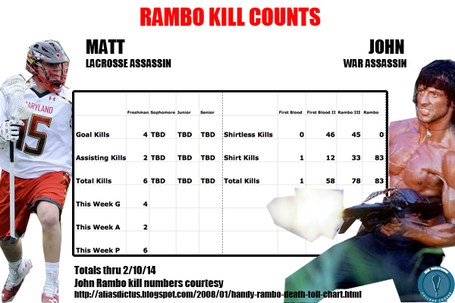 Matt has already exceeded John's body count in John's first documentary (although, John's wounded and injured count in First Blood was likely higher than Matt's against Mount St. Mary's). John's rampage in Rambo: First Blood Part II is potentially within reach for Matt this season, although it would take a sizeable effort from the Terrapin to achieve John's mark (there's a solid argument to be made that registering kills against the ACC is more difficult than slicing Soviet and Vietnamese commandos in the jungle). The carnage has only begun.