2014 College Lacrosse Preview: The Look of a Champion

Share All sharing options for: 2014 College Lacrosse Preview: The Look of a Champion

Champions come in different flavors, but traits are emerging that indicate the qualities of those that take a victory lap on Memorial Monday. Over the last five seasons, as data has continued to develop, the qualities of national champions -- not taking into account principles like correlation -- have hinged upon the following:

Here's a chart that summarizes all of the various metrics considered: 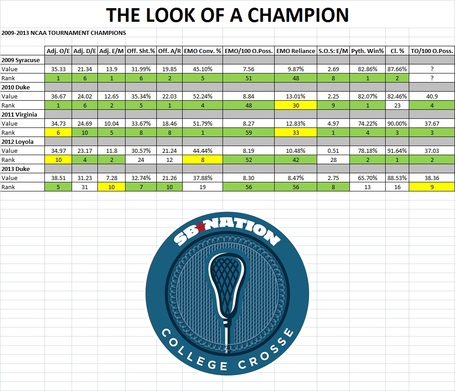 So, what does this mean for 2014 projection purposes? It's necessarily unclear -- teams change from season to season, and even those with a sense of consistency in the roster are subject to the travails that new opportunities present -- but there's a real good chance that the coming season's champion comes out of the ACC. That league -- more than any other -- is expected to provide the heaviest strength of schedule for its participants, an attribute that has indicated a national champion in the recent past. Digging a little deeper into that conference to find a potential national champion, Notre Dame could be a long shot for the national title given the team's historic struggle to create offense, Maryland maintains an offensive variable that may limit its chances given the volume of youth dotting the team's offensive efforts, and Virginia has balance questions lingering from a season ago. That leaves some combination of Syracuse, North Carolina, and Duke as programs that hold the most potential -- based on what prior year championship teams looked like -- for cutting the nets in Baltimore.

It's no surprise, then, that Orange, Tar Heels, and Blue Devils will likely start the season in the top three in both major polls. Each team simply looks -- at this point -- most like the teams that have put hardware into a trophy cabinet in each of the last five seasons.