The keeper had a strong MAAC Tournament and has a "situation" happening.

Share All sharing options for: The AJ Levell Experience

AJ Levell -- and the Detroit defense in totem -- had a pretty strong MAAC Tournament. The Titans -- the tournament's four-seed, backing into the league's final playoff position after winning its final regular season game against Canisius -- made a surprising run to the conference's championship, earning its first ever berth to the NCAA Tournament after knocking off top seeded Marist in the semifinals and Siena in the final. Levell had played fairly well during the regular season, but went all HULKSMASH! when it mattered most for Detroit. Here's a truncated illustration of Levell's performance over the Titans' unexpected run to the MAAC's automatic invitation:

Levell was a unstoppable force of stopping opposing forces against Marist: He single-handedly stopped half of Marist's offensive opportunities, turned away almost 74 percent of the shots that he needed to stop, saw significantly more rubber than usual, and helped limit the Red Foxes' shooting (which usually clicks around 29 percent of their attempts) to just 17 percent. That's a bonkers level of production against an offense ranked in the top half of the nation. Against Siena he wasn't quite as impressive as his effort in the semifinal (especially during the first 30 minutes of play), but his stone-cold stuff of Colin Clive with little time remaining in the fourth quarter preserved Detroit's opportunity to pull out the overtime victory and send the Titans off to the NCAA Tournament.

But that's not the most important thing about Levell as he and Detroit prepare for a date with Notre Dame. No, what's most important all is what the video up there notes: Levell has the most ridiculous haircut I've ever seen, suitable for joining a biker gang or running a pawn shop: 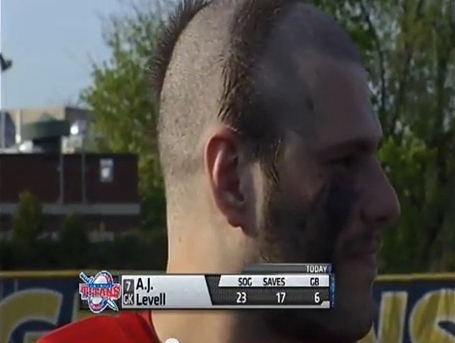 Here's Levell on the situation happening with his head:

"Our motto this week was party on, have fun. Just do what we do best. That's the only way that I can explain that."

What the hell kind of party does Levell and the rest of the Detroit team want to throw? It looks like he stuck his head inside the guts of a copy machine. Shine on, you crazy diamond.