No matter what sport it is, when you talk Army-Navy, you're talking about one of the most storied rivalries in college athletics. Lacrosse is no exception, as the Black Knights and Midshipmen have been going at it since the 1920's, playing for the pride of their specific service academy. Even in years where one team is superior to the other, it remains one of those "throw out the record book" games. And, of course, with both teams' players preparing to serve our great nation, it's easily the most patriotic game around (as well as when the both of them face Air Force). Goosebumps are commonplace when both teams run out onto the field, the American flag leading the charge prior to both teams leaving it all out on the field.

This season Army's been putting together a pretty good season; Navy, despite its struggles, showed its mettle against Maryland last Friday. Regardless of how either team's season has gone this year, when the motto's "Beat Army" or "Beat Navy," a whole campaign can basically come down to this for both teams. Here's a look at how they stack up. (Stats are as of last week as NCAA statistics are updated on Mondays after press time.) 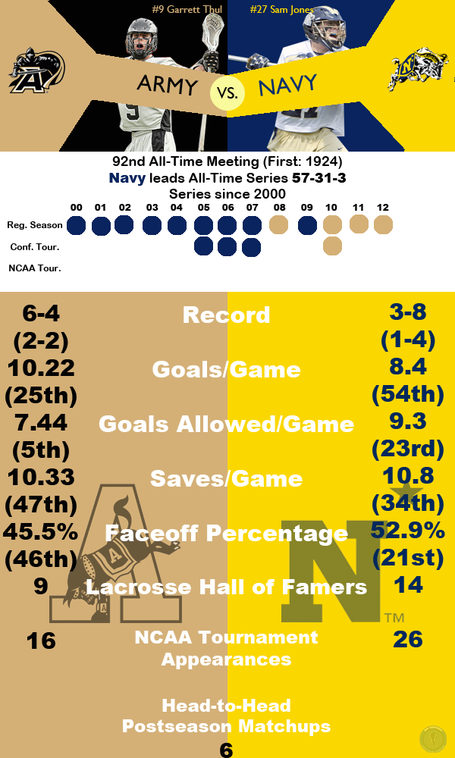 The Black Knights and Midshipmen will square off Saturday afternoon on CBS Sports Network.