Notre Dame and Syracuse are no strangers to the big stage at MetLife Stadium. The Orange have played in all four previous iterations of the event while Notre Dame has played in the past two. However, the two have yet to play their crucial final Big East regular season game against one another in the Meadowlands. That is until now.

The Irish and the Orange will square off Saturday evening with a lot on the line in terms of Big East Tournament seeding. The scenarios go as follows:

As a result of all this, the Big East's premier matchup just got even more intense. Ever since the conference got put together, Notre Dame-Syracuse has become the league battle that lacrosse fans circle on their calendars each year. With both teams moving into the ACC next season, this is only the beginning of what should be a heated rivalry for years to come. It may not be on the same level as Johns Hopkins, Virginia, or Princeton yet for the Orange, but it has risen within the 'Cuse faithful as "gotta have" game. Meanwhile, the folks in South Bend have treated this as one of their biggest rivalries. With the game taking the stage as the nightcap of the Big City Classic, this rivalry's about to ratchet itself up to another level.

ESPNU has the action after Cornell-Princeton's done (roughly around 6:30). Here's a look at these two teams heading into the house of Eli and Sa.. (/cries uncontrollably as a Jet fan) 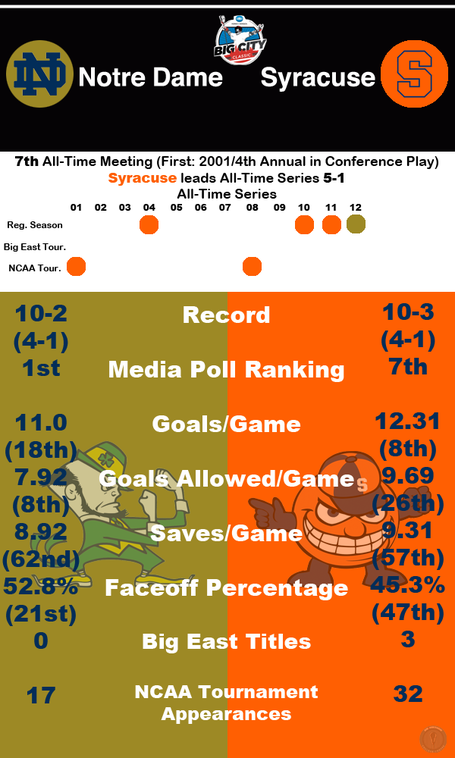