The Ivy League's biggest rivalry is on the biggest regular season stage, and we've got the graphical analysis to get you ready for it.

With the high volume of Long Islanders/New Jerseyians that play for Cornell and Princeton, it was just a matter of time before this got moved to the New York City area, right? Well, it's finally happening this weekend as the Tigers and the Big Red head for the bright lights of MetLife Stadium and the Big City Classic. Princeton's in the event for the third time, this year facing a different Central New York school, while Cornell's finally getting to play at a professional stadium in the New York City area in something other than hockey.

It's a good choice by the organizers, too. For years these two have been the class of the Ivy League and their matchup often determines who wins the regular season crown. This season Cornell has already clinched the title, but it's still a great game to watch. It also could be a pivotal game with respect to the NCAA Tournament picture. A win for Cornell would boost their RPI numbers a bit, giving them a better seed, while a Princeton win could get them on the right side of the bubble. Of course, this could be the first of two matchups in the coming weeks with the Ivy Tournament up in Ithaca next weekend, allowing Princeton to survive a loss this Saturday and win back-to-back games next week to clinch an auto-bid to the NCAA Tournament. However, with this matchup, a win for either team against their biggest rival (Otto the Orange runs out of tunnel that he was waiting in, interrupts the game, and holds a "WHAT ABOUT ME?!?!" sign at midfield before some Jersey security guys tackle him to the ground) is extremely important for the program. Oh, and did we mention ROB PANNELL AND TOM SCHREIBER are playing in this game? No? Well, it just happened.

The action gets underway at MetLife Stadium at 4:00 and will be on ESPNU. Here's a look at the richest rivalry in the country club conference. 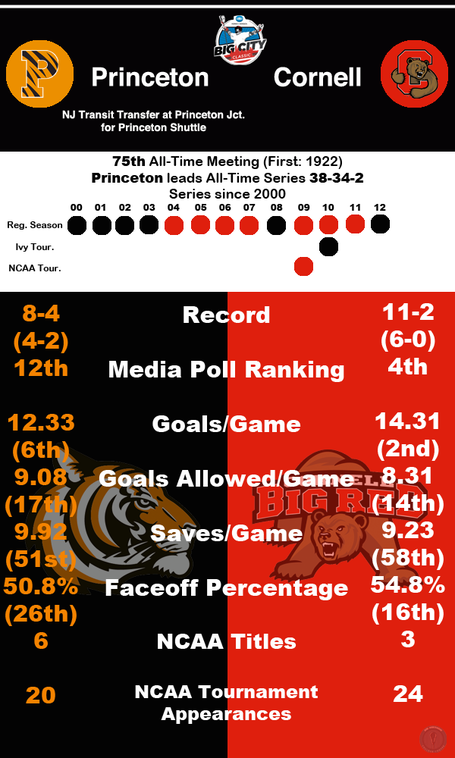 (Click to make it longer than rush hour traffic on the George Washington Bridge.)