Do you love big weeks of lacrosse? We do too. That's why THE FACEOFF is here to help.

My oh my, the season's coming down to the wire and we've got a huge weekend of lacrosse up ahead. The ACC and Patriot League Tournaments, the Big City Classic, and The Battle on Charles Street all dot the calendar to make up a lacrosse fan's dream weekend. On top of that, crucial conference battles will be played out for teams looking to make one last effort at making their conference tournaments.

Here at THE FACEOFF we've got your usual updated leaderboards and polls and graphs and stuff. We've also got eight games on the "7 to Watch" because they aren't lying about the Big City Classic being "bigger than ever" with those two matchups. We don't have the ACC Tournament or the Patriot League Tournament on the "7 to Watch" feature because we've got some goodies for those coming up later on in the week. Also: kind of ignore that Game of the Week star this week, as there's really three can't miss games on ESPNU this Saturday in addition to the conference tournament tilts (we'd be cheating if we put that star next to "ACC Championship").

So, without further ado, here's a look at the week ahead. 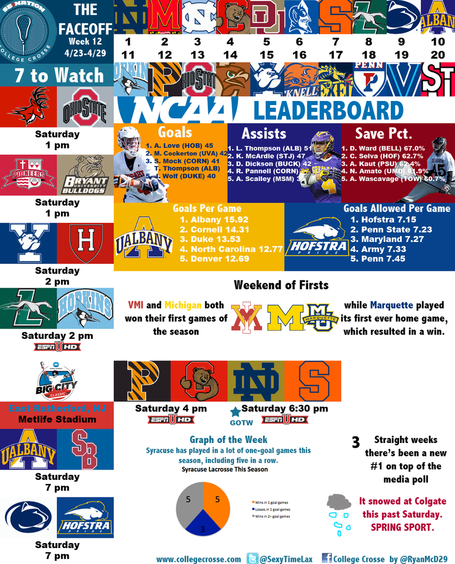 We've got some really cool things coming up in the coming days for the conference tournaments and the Big City Classic, so keep it here at College Crosse all week long to stay in touch with what's going on as you're floating in lacrosse heaven.